O Canada: Broncos get their RB

Share All sharing options for: O Canada: Broncos get their RB

Tough to imagine a recruit named 'Mike Smith' getting nearly the publicity that Milipitas High School running back Squally Canada has enjoyed lately—mainly thanks to his one-of-a-kind name, but the Broncos certainly didn't recruit him on name alone (even if it is tough to forget). The Broncos were the first school to step up and offer the 5'11" 180 lb. speedster and other schools were quick to jump on the Canada bandwagon. Alas, it looks like the Broncos were always the school to beat, and they remain unbeaten...getting a verbal from Mr. Canada on his campus visit over the last two days. Canada rushed for nearly 1,000 yards last season on a modest 127 carries (7.7 YPC) and his recruitment had started to pick up a lot of steam of late as he grabbed offers from Colorado, Colorado State, Washington State, Houston and Nevada to go along with his Bronco offer. Friday afternoon, Squally himself made the news official by posting the following pic to his instagram and twitter timeline. 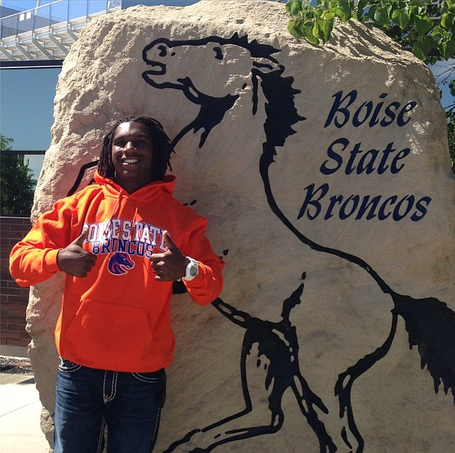 A sweatshirt in 90 degree weather? I like the dedication.

Squally is now the 6th verbal commit of the Broncos' 2014 class, and will probably get more company soon if the Broncos post-football camp streak of verbals continues. Welcome to Bronco Nation, kid!