Tozer is the semi-rare JC walk-on, transferring from Foothill Community College in the Spring of 2011 with 3 years to play 2. Tozer was a three-year football letter winner in high school and earned first-team All-West Catholic Athletic League and second-team all-state honors as a senior. At Foothill Community College, Tozer was a two-time All-NorCal first team selection.

I'm afraid this just can't be improved upon. A road-grading guard named "Tozer". It's perfection. 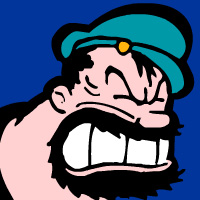 I don't really think that Tozer is a huge threat to crack the starting rotation this season at guard, but that doesn't mean we'll just write him off—it's a long season. Tozer has the size and girth to really create some sizeable run lanes for the rushing attack or to take up more than one defender in pass blocking situations. He's likely to find himself behind Spencer Gerke or Marcus Henry at the very least, and at best I think he'll be battling Mario Yakoo and Robert Ash for a spot on the 2-deep. Like I said before...it's a long season, and one must be ready for injuries, suspensions and the like to crop up sooner or later. Couple that with the fact that the Broncos are known to shake up the lineup as frequently as once a week and Tozer has some wiggle room to break into a more plum spot in the lineup. Of course, he can earn a larger role with a good Fall camp as well. I tend to think he'll be a solid backup this season, but once August rolls around, he can take control of his own destiny.

Only Mario Yakoo tips the scales more than Tozer, which has become a point of contention between the two as they battle for bragging rights. To stay in the lead, Yakoo has been on the Crisco-only diet™ while Tozer has taken to eating only gravel.