Last day of the 70s. Cling to those disco records...oh wait, we're going the other way.

Texas recruiting really picked up in 2012 and Baggett is proof, as the Broncos snuck into TCU's back yard and got a commitment from the future O-lineman. Baggett is plenty seasoned, having started 38 games for the powerhouse program. Steven garnered first team all-area and first team all-district honors as a senior guard and was able to snag honorable mention all-district recognition as a sophomore and a junior as well. Baggett was given a 3-star rating by Scout.com and chose the Broncos over offers from Air Force, New Mexico State and Western Kentucky. 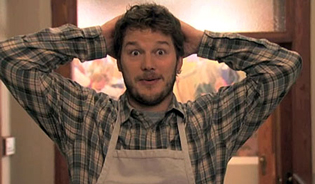 Still think there's a little Andy Dwyer in there.

I feel like I'm reaching the end of my usefulness in discussing the O-line, which is unfortunate because we have about six straight days of lineman after a 1 day break for Tyler Horn. This isn't because Boise State has no depth or drama along the line—it's the opposite. Boise State has a glut of depth and talent along the O-line, which is a good thing except for the fact that we have so many young guys coming up through the ranks with so much versatility that I have no idea where they are going to line up, nor have we seen enough of them for me to even make an educated guess as to their place on the depth chart. I will say this about Baggett: bravo on the weight gain. Last season, Baggett was listed as 6'3" (same as this year), but his weight was a paltry-for-a-lineman 225 lbs. This season he's a more robust 275 and is close to the sweet spot for a D-1 lineman. Baggett played left tackle in high school, and if he sticks around at that position at Boise State, he'll be primarily contending with Chuck Leno this Fall. If he switches ends, he'd run into Rees Odhiambo or maybe Jake Broyles. Of course, he could move to guard, but I think stoutness is a virtue there and he's still a bit light for those duties. My gut says he'll be a solid backup at tackle this year and really be in the mix next year when Broyles and Leno are gonezo. Baggett's said to have great agility and his high school coach called him a "great finisher", traits that will suit him well anywhere on the line, but at this early stage, I think tackle suits him best and is the best place for his skills to blossom.

The "great finisher" quote that has been attributed to Baggett's high school coach was actually when a reporter misheard him raving about a "great Finnish" restaurant that had opened in Arlington. The man loves turnips.