We've got 75 days until kickoff ...but that roster spot has yet to be assigned. Today, I'll highlight an incoming frosh who could end up donning the 75 jersey—Andrew Tercek 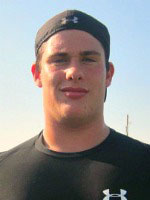 Tercek was a four-year starter at East Central High School, where he played 3 years at tackle and one at center. Tercek garnered first team all-district honors in his last two seasons at ECHS, and two honorable-mention nods following his freshman and sophomore campaigns. As a senior, Tercek was also named honorable-mention to the all-state team and was named to the Class 5A Super Team. Rated a 3-star prospect by Scout.com and the #21 rated center in the country, Tercek had offers from Army, Nevada, North Texas and Rice.

Definition: Sparing in the use of words; abrupt. Sure, I'll take that from a center. 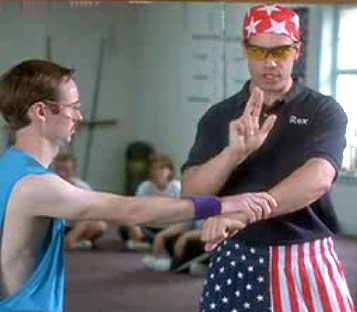 Break the wrist. Walk away.

Tercek almost surely won't play this season barring a total catastrophe, but to say he's the future at center isn't a stretch in the least. Tercek is a strong kid...and probably more importantly, a smart kid. The center is often thought of as the "captain" of the O-line and a high IQ is a definite bonus. Tercek graduated Summa Cum Laude from East Central and was a four year starter—this indicates book smarts and football smarts. To top things off, he's a tenacious blocker, with long arms for his body and good footwork. He could play guard or center, but I think his future definitely lies at center and it wouldn't be surprising to see him step right into that role in 2014. All-MWC center Matt Paradis is a senior, and will vacate his slot at the end of this year. Tercek will need to prepare to be the man as soon as January rolls around, and I have a sneaking suspicion he's up to the task. If things go according to plan, Tercek may end up with 8 straight years of starting experience under his belt. Here are some highlights to get you through Tercek's likely redshirt.

The "Don't Mess with Texas" credo has been around for some time, but incidents of messing with Texas dropped dramatically after Tercek wore the t-shirt to school. Cardboard cutouts of Tercek are now posted every 500 yards along the Texas border.