You don't have to sell Jamar Taylor to any Boise State fans, but in Miami, he's still a relative unknown. Taylor is out to change that in a hurry.

Though his kidneys were rumored to have caused his precipitous second round drop, Boise State fans never saw any reasons to doubt Jamar Taylor's abilities. Now, with Miami's rookie camp underway, he doesn't mean to let the fins see any chinks in his armor either. Honestly, to hear ESPN blogger James Walker tell it—Miami fans might not know quite what to do having a competent man in the secondary:

Jamar Taylor fluidly went into his backpedal Friday, the first day of rookie minicamp. Taylor watched both the receiver and quarterback. When the ball was thrown, Taylor jumped the route and made a perfectly timed deflection...It was the kind of play we didn't see much of from Miami's cornerbacks last season.

Practice? We're talking about practice? Apparently...but with one corner spot wide-open and a 2nd and 3rd rounder competing against vets for the spot, every little bit counts. Ironically, (or unironically...what do I know?) the 3rd round corner pickup that Taylor will find himself competing against is Will Davis, a draft pick out of Utah State—and one of the vets he'll try to unseat is Richard Marshall, an 8th year player out of Fresno State. It's an old WAC rerun, y'all!

Sensing the theme, Taylor was asked if he or Davis are thinking much about the fact that they both hail from "small schools" (Boise State's enrollment is over 20k, BTW). Taylor answered diplomatically, instead of the more popular "that's a clown question, bro".

"No, we don’t worry about that," Taylor said. "We just worry about getting better and continue to just compete. As long as we compete, everything else will take care of itself."

What's in a number?

Among the other news to come out of Dolphins rookie camp is that Taylor has been given/gifted the number 22 jersey. A jersey that Doug Martin made famous at Boise State and is now rocking in Tampa Bay to similar results. Of course, none of the camp numbers are "official" until week 1 of the season, but I strongly urge Jamar to keep the digits. They have magical, hamstery qualities.

No embed code, so just click the screencap below to watch/hear Jamar talk about rookie camp in Miami. 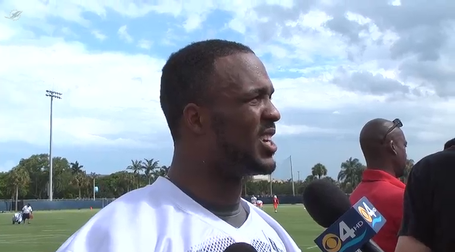 More video? Sure, why not?

Well, it's more audio than anything, but here's Coach Pete filling the "Finsiders" in on what kind of player they're getting in Jamar (spoiler: a good one). 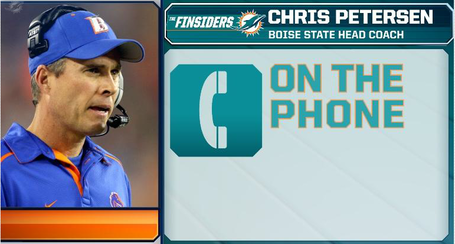 Listen to it on your phone and you can pretend you're talking to Coach Pete!