The long weekend is over, but the long countdown has barely begun.

We've got just 95 days until the Broncos hit Seattle, but that roster spot has yet to be assigned, so today I'll highlight a player who could don that number in the future—Alec Dhaenens 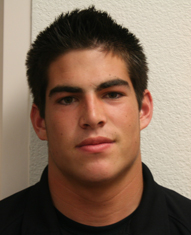 As part of an amazing two-fer. The Broncos were able to land Dhaenens shortly after his lifelong friend and teammate Joe Martarano pulled the trigger and it just so happened that both were top players in the state at their positions—and right in the Broncos back yard. You can't ask for a better scenario. Prior to his verbal, Dhaenens had wrapped a nice junior season where he caught 20 passes for 452 yards and six touchdowns and was subsequently named first-team All-Snake River Valley and first team all-state. Dhaenens announced his Bronco aspirations soon after and likely scared off many recruiters, save Nevada and WSU...and a season-ending knee injury last year further kept his recruiting from blowing up—all the better for the Broncos, as Dhaenens stuck with Boise State just as they stuck with him. 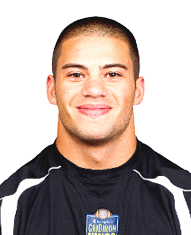 Well, this one is probably a tad easier than the others. Dhaenens is a fantastic candidate to grayshirt due to his proximity to campus and ongoing knee rehab. He may surprise us all and do a standard redshirt, but that's about as far as the surprises will likely go with the talented local tight end. Fortunately for the Broncos, his services aren't direly needed at this point in time. Gabe Linehan, also coming off an injury, will be looking for a big senior season in 2013, and Holden Huff came on strong late last year as a pass-catching specialist TE. Add Connor Peters into the mix as a blocking specialist TE, the talented but injury-prone Kyle Sosnowski as a hybrid TE and walk-ons Jake Hardee and Brennyn Dunn and the Broncos look pretty stacked at tight end for the time being. In case of emergency, I'd expect the Broncos to need go no further than their walk-ons and in a catastrophe, Jake Roh might get the first call due to his relative health. Make no mistake though, Dhaenens looks to be a fantastic tight end prospect and one that can do it all. He was rated the 43rd best TE in the country by Scout.com and that was AFTER injury, so the Broncos could have legitimately landed an elite prospect without even having to step on a plane. Despite our eagerness to see Alec on The Blue, I think Bronco fans should welcome a grayshirt as he is able to reach 100% with his ACL, bulk up, study up, and acclimate himself to college life. When 2014 rolls around, a subsequent redshirt may be unnecessary if Dhaenens is as good as advertised—and all early indications are that he is.

Dhaenen's hometown, Fruitland, was once known as "Frootland" until becoming embroiled in a years-long copyright battle with Toucan Sam.