Happy Memorial Day everyone. Hit the countdown, then hit the BBQ. 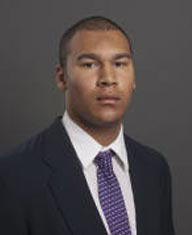 On most teams, the guy from the UK would easily have travelled the furthest distance to join the squad. Boise State obviously isn't most teams, as a full two players (Geraldo Boldewijn and Ricky Tjong-A-Tjoe) racked up more frequent flier miles to get to The Blue™. Still, Elliot Hoyte is a long way from home, but may be more experienced in the American game than his aforementioned Dutch counterparts. Hoyte, the son of Nigel Hoyte—a former world league player for the London Monarchs—has grown up around the American game, even in the land of soccer and cricket. He somehow found his way to a Boise State football camp through an association with Chase Baker, who played rugby in some events in the UK. The Broncos liked the cut of his jib, and I suppose the rest is history.

Picture him playing tackle wearing a monocle and sporting a freshly waxed mustache. Seriously, do this. 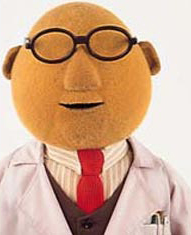 About a month ago, I compared Hoyte to muppet scientist Bunsen Honeydew. I'm going to get my legs broken one of these days, aren't I?

We're four days into the countdown and highlighting yet another D-lineman...but 2013 seems like a year we might well need all of them, and Elliot Hoyte is maybe the most intriguing of the bunch. Hoyte has the body-type of Tyrone Crawford, the rawness of a redshirt Ricky Tjong-A-Tjoe and just maybe a higher ceiling than both—and since Crawford was a 3rd-round draft pick that is saying something. Of course, I'm setting the bar awfully high for a kid that we've barely seen in action, but that's the fun of these countdowns...everyone is an All-American in the offseason, even the ones that aren't...well...American. Hoyte has his work cut out for him to land in the "heavy rotation" (no pun intended) of DTs, which is to say, the top 4—but as we've discussed since day 99, this is a good year for competition and a great year to expect the unexpected. No one thought a few months ago that we'd be a defensive end down, or that true soph Armand Nance might end up being our 2nd most experienced defensive tackle (once Tyler Horn's position is solidified). Hoyte may be raw, but he's big, strong and hungry (likely in more ways than one)...all 3 are good attributes to have on your interior defensive line. Hoyte's probably in a pretty good spot post-Spring ball, but his real competition may just arrive later this summer in the form of Justin Taimatuia and Nick Terry.

For the sake of argument, let's say Tyler Horn does move back outside to defensive end this Fall...that would mean that Ricky Tjong-A-Tjoe and Armand Nance "OR" Deuce Mataele will likely be running with the ones whilst Hoyte battles for a 4-spot with Taimatuia and Terry. If Horn stays on the inside, I have to think that those top 4 spots are locked up and it will be up to that aforementioned trio to try to gain ground in the summer. I like what Hoyte brings to the table as far as versatility, but I still think that his knowledge gap might keep him from soaking up too much PT until next year when Ricky Tjong-A-Tjoe's absence will shake things up again. Hoyte will play this year—just how much will be known in early to mid-August.

Much has been made of the politeness of the British, but Hoyte bucks that trend entirely. Opposing O-lineman will be offered a post game tea...but he patently refuses to offer them biscuits. Ouch.