You all know how this works by now, right? We're counting down one roster spot per day until the opener—and if that day corresponds with an actual assigned jersey, all the better. It'll be a marathon that starts now and ends on the cusp of the opener against the Huskies. Let's get to it.

We've got 99 days until kickoff, but there's a large Canadian void left at that spot for the time being. Today, I'll highlight a player that could be Mike Atkinson's heir apparent—Justin Taimatuia 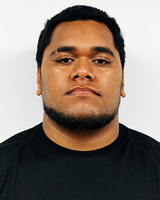 Well, technically speaking, he isn't on the Blue yet...but that's bound to change in short order according to his soon-to-be-inactive Twitter page. Taimatuia was a big-time player at Tafuna in American Samoa and carried that play through 2 years at Fort Scott CC. Boise State beat out a host of teams for his services—among them: Houston, Indiana, La Tech, South Alabama, Tennessee State, Texas A&M, Texas Tech, UTSA and Toledo.

Until I hear his last name straight from his mouth and then practice it for a few months...he's "JT" to me. 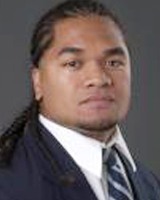 The time is right for Taimatuia to step right into a starting or co-starting role with the Broncos. The only better scenario would have been if he'd been available as a mid-year transfer ala Deuce Mataele. Taimatuia has size reminiscent of Michael Atkinson and if he can clog up run lanes like the big Canadian, I think we'll be quite pleased with the interior D-line play for the next two years. Mataele has a good motor and maybe a step more quickness, but Taimatuia is a big time JC-transfer and can compete for playing time from day one. It's early in the game yet to spell out any kind of D-line pecking order, and part of the interior depth chart will rely on whether Tyler Horn stays inside or moves outside due to the loss of Sam Ukwuachu. For now, I'd say that—sans Horn—the DT rotation is almost sure to have Ricky Tjong-A-Tjoe holding down one spot, with Taimatuia, Mataele, Armand Nance and Elliot Hoyte competing for the other spot. Of course, true frosh Nick Terry could be a factor as well since the Broncos find themselves without a wealth of experienced depth for 2013. Taimatuia, even if he lands in tier 2 of the tackle rotation, should get a lot of PT this year and I expect the JC-transfers (Mataele and Taimatuia) to be immediate impact players. The D-line is in upheaval right now, but don't mistake that for a sign of an impeding down year. The Broncos have a LOT of talent across the D-line and will get that talent on the field in one way or the other.

Taimatuia once won the prestigious Bronze Gloves boxing tournament (which took place in his uncle's back yard).