Boise State has found their QB for next year's recruiting class in Jalen Greene and while his stature (6'3") is above Bronco average...his running ability appears to be a new trend. All QBs on the Broncos current and future roster can run—especially Hedrick, Patti and future Bronco Greene. Are the Broncos prepping to switch to an option-based attack or even (gasp) "The Pistol"? Even Joe Southwick is feeling the need...the need for speed:

"I like to run," Southwick said. "… being able to extend things with my legs will be a big part of (growing) my game."

Forbes magazine posted an article this week called "Boise State Football And The Blueprint For Organizational Greatness" in which the author (Jason Belzer) tells the rest of the world what we already know: Chris Petersen is awesome. This article is well worth a read to see an outsiders' view into what makes Boise State a special program but also because sometimes it's good to step back and realize that...yeah...what BSU's been doing for over a decade now is pretty darn amazing.

Apparently, JC-transfer DT Deuce Mataele is "turning heads" in Spring Camp with his knack for rushing the passer. Good lordy, does this make me excited for next season. Freshman All-America Sam Ukwuachu on one end, First-Team All-MWC Demarcus Lawrence on the other...Mataele, Tjong-A-Tjoe or Horn on the interior (Horn had 5 sacks last season). Get your running shoes on, opposing QBs.

Not the biggest tennis fan, but always cool to have pics circulating with world #1 tennis player Novak Djokovic showing a little Bronco love. 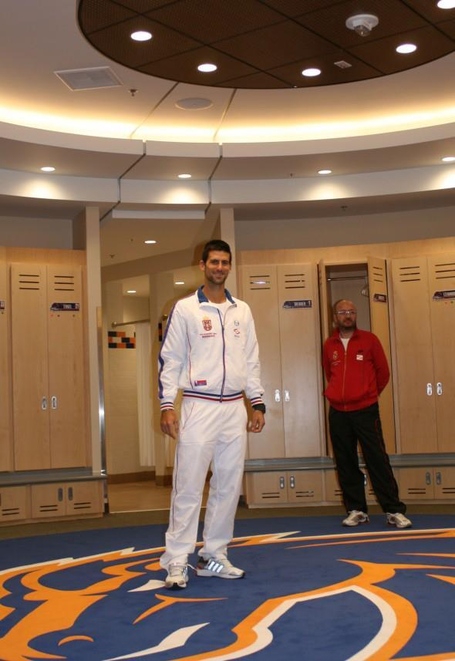