Week 1 of Spring practice is in the books. Melvin Marsh here with the rub.

Before the regular foot-ball particulars, I'd like to extend a hearty "hail fellow, well met" to the Bronco basket-ball squadron, who I'm told punched a ticket to "The Big Charleston Dance" last evening. Their game will be this Wednesday in Dayton, Ohio..."I once was datin' a gal in Dayton..."—ah well, I won't bore you with that old Vaudeville routine...I'm sure you all know it by heart!

A Dutchman in the trenches

Am told Mr. Ricky Tjong-A-Tjoe hails from the land of windmills and will be anchoring the Bronco defensive line this upcoming season. One might be tempted to give Mr. Tjoe the icy mitt, on account of the neutrality of the Dutch during Worldwide Skirmish 1, but I for one am willing to let by-gones be by-gones.

I wonder if defensive end Sammy Ukwuachu is related to Sal Ukwuachu, the petrol magnate from Madison, Wisconsin. If so, he'll have plenty of options even if foot-ball doesn't pan out. Talk about simoleans!

I hear tell that JoJo Southwick is the man-to-beat in the Boise State backfield—but don't take your eye off the diminutive I-talian, Nick Patti. Last Thursday, I saw Mr. Patti fake a pitch to his wingback and then really get a wiggle on! Before you knew it, he was racing toward the endzone and the hapless defenders were left tripping for biscuits if you catch my meaning!

Boise State defensive back Deontae "Darb" Florence continues to burgle for-ward passes from unsuspecting wingbacks. He has 3 such inter-ceptions thus far this Spring—a hotsy totsy performance if I've ever seen one.

Jazz man and star of stage and screen, "Juke Joint" Joe Callaway swung by practice to serenade the boys with his new hit "Oh Oh Oh You Broncos (Sweet Gal of Mine)". At the end of his rousing rendition, there wasn't a man in the house that wasn't ready to hit the field like a Chicago Typewriter (nor a dry eye amongst the assembled press men).

This week I was able to run down the venerated skipper of the Bronco squadron and had him level with me. Give a listen, won't you?

I'm starting to get the "hang" of this Twitter machine, so if you have the gumption you know where to go (@MelvinMarsh) 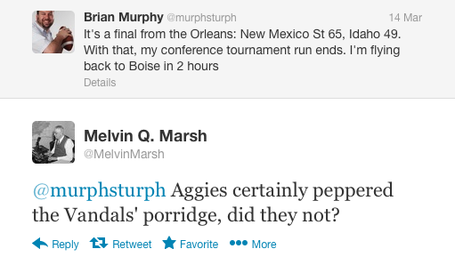