It's March, and we're tantalizingly close to the start of Spring Camp, but since that journey is not yet finished, let's talk about anything but that.

Over the last month or so, I've been proposing a single topic of discussion for our weekend diversion from NO FOOTBALL—this weekend, it's Thunderdome. I'll throw out a few topics, but it's basically up to you where we go with this weekend's thread. Aaand...GO.

Jamar Taylor and DJ Harper both showed well at the NFL combine this week—especially Taylor. Did Taylor do enough to go on day 1? Will some other Broncos get in the draft discussion after BSU's pro day on March 21st? Is Jerrell Gavins short?

Most analysts and bubble-watchers believe the MWC could get 5 teams in the dance. Basically, if Boise State (who's on a 3-game win-streak) can win 2 of their next 3 they're probably a lock. If they can get past CSU tomorrow night at the blackout, they could be inching closer to dancin'.

MWC to the rescue

The same conference that has banned Boise State from wearing blue on blue the last two seasons has now swooped in to defend the Broncos against a similar rule proposed by the NCAA. Wha?! 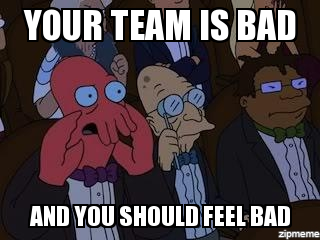 Stuff, things, etc. I got nothin'