Share All sharing options for: Wake up and smell the links: 11-8-13

The daily link dump is in the process of acquiring a newer, more inclusive name so today I went with an interim title that no one would have voted for anyway. Here's your stuff...

Oregon never led the Cardinal yesterday night and without a miraculous 20-point fourth quarter would have been laughed right out of town by a bunch of privileged white kids. Now Oregon will have to go back to their Eugene digs to lick their wounds in their palatial, Nike-funded, NASA-designed space station. Nothing gets you over a loss like using your personal head-massager and playing some Call of Duty on your in-locker PS3. Don't fail us now, Florida State!

A special message for recruiting watchers

Yes, Boise State lost another 2014 verbal (Dimitri Flowers to Oklahoma), and fans were understandably on-edge...but thankfully one of our biggest "gets" apparently has a message of hope for the Bronco faithful: 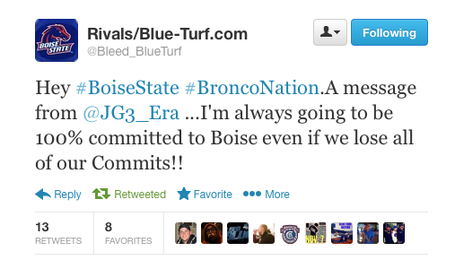 Football has a bye, but futbol marches on

The Boise State women's soccer team—a 3 seed—took down #2 seed Fresno State in the MWC tournament semifinals last night to move to the title match. The Bronco gals defeated the Bulldogs in double OT and will face San Diego State for the championship on Saturday at 1pm. Good luck, ladies.

It's real, live football and we have a bye week. Might be worth a look. Current Boise State commit Khalil Oliver will be in action with his Rocky Mountain teammates against Eagle.