Share All sharing options for: My guess for Boise State's bowl game is as good as yours

The Boise State Broncos are bowl eligible - not the bowls that any of us wanted, like the Fiesta or the Sugar or the one in the Bahamas, but bowls nonetheless. And presently, the Broncos could land in any of the six Mountain West ones, depending on what happens in the season's final three weeks. We are on high bowl alert, and we will remain so until December 8 when thing will be sorted out because the season is over and things have to be sorted.

Here are some charts and tables to justify my heinous guessing about where Boise State will end up.

Mountain West standings, week whatever week this is 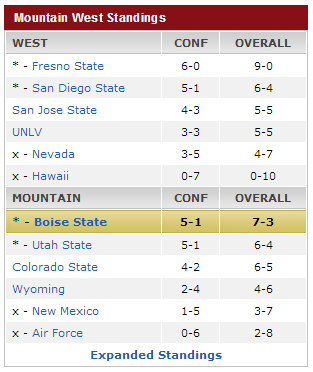 Four teams are bowl eligible today, and four more remain alive. Colorado State needs one win and has Air Force (and Utah State) still on the schedule. San Jose State needs one win and has Navy and Fresno remaining. UNLV plays Air Force and San Diego State, needing one win. Wyoming gets Hawaii at home and Utah State on the road and will need to win both.

From what I can tell, the Las Vegas Bowl gets first choice of bowl-eligible Mountain West teams. The remaining five bowls have no choice and are assigned the best fit based on who's left. They'll get what they get and not throw a fit.

Scenario No. 1: Fresno State goes to the BCS.

Boise State is likely the most attractive Mountain West option, and the Vegas Bowl initiates Bronco Protocol and chooses them. This saves a ton of money on not having to update half of the bowl advertising.

Fresno would then be a sought-after bowl team, and the Vegas might choose the Bulldogs. That would push Boise State into the pool of nobodies and make all the bowls an option. Fingers crossed for the Poinsettia.

A tradition unlike any other, Boise State playing in the Vegas Bowl wouldn't be all that bad, especially since the Pac-12 opponent could be Arizona, Oregon State, or USC.

Army is supposed to go to the P-Bowl this year, but they aren't bowl eligible. That means the Poinsettia will have a wild card like Toledo or Bowling Green.

Trips to Hawaii are never a bad thing, even if you do have to play Rice or Marshall.

The good thing about playing in Boise for bowl season is that fans don't have to travel to watch. That's one of the only good things I can think of. Ball State or Buffalo, according to the bowl director, would be the likely matchup.

New Mexico at Christmastime isn't exactly bowl heaven, but at least you get a Pac-12 opponent. It could be Arizona or Oregon State.

Fort Worth, Texas, is Boise State recruiting country but probably a better fit for schools that aren't 1,600 miles away. Navy is bowl eligible and will be playing in this one.

I'm leaving you in charge of where Boise State goes for its bowl game. Be the decider in the comments.