Editor's Note: We are in the process of choosing a new name for the daily links. Each day this week we will present you, the reader, with a potential name. So, what do you think of today's name? Please vote and comment below.

Boone Bartlome, the Kuna football player who broke his neck in the State quarterfinals last week had a surprise visit from Coach Pete yesterday and responded by moving his arm and shoulders—something he hadn't been able to do since shattering his C4 vertebrae. Boise State is helping with Boone's recovery effort and has extended free tickets to tomorrow's game to the entire Kuna football team and their families, and will have a tribute to Boone during the game. Here's to a full recovery, Boone. 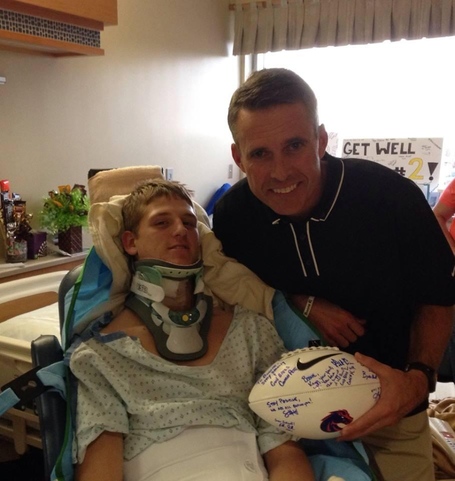 Kyle Wilson's jersey number has grown on him

"Nah, I’m not trying to talk about that," Wilson said. Pressed a little further, Wilson said, "I’m not going to discuss that with you guys."

Bob Behler, the voice of the Broncos, rates himself a "2" on the homer scale

For the record, no writer on this site is below a 12.

Are more snaps leading to more injuries for the Broncos?

ETC: This man is a HERO.