Powerfull polls: Mountain West rankings and other polls for Week 12

Share All sharing options for: Powerfull polls: Mountain West rankings and other polls for Week 12

Explain myself: For reasons I do not fully understand, I moved San Jose State ahead of UNLV even though both lost close games to teams above them last week. I'm assuming I have some sort of Bobby Hauck prejudice. Also, I'm a little peeved that the Runnin' Rebs didn't beat Utah State because then the Broncos could have had a free loss in the final three games and still made the MW title game. One of Boise State's remaining three is at San Diego State, and yes, now that you ask, I am looking past Wyoming and eating my feelings for SDSU.

For reference, here are the Mountain West conference standings - free from my bias (other than the huge, gold highlight for Boise State). 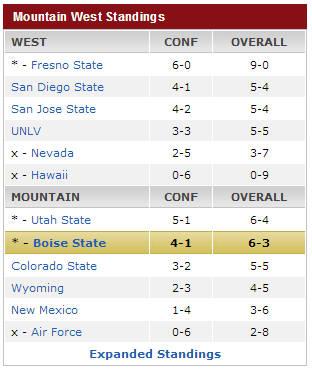 Explain myself: None of these teams play each other the rest of the season, but wouldn't it be cool if they did? I'm speaking, specifically about Alabama vs. Baylor, Florida State vs. the Chiefs, and Northern Illinois vs. Fresno. I don't really care to see Ohio State play any more than I already have to.

I still harbor hopes and dreams of Fresno not making a BCS game because I despise them to my core, so there's still the possibility of the Bulldogs in the Vegas Bowl. FYI, the Vegas Bowl gets first choice of Mountain West teams, and then the Mountain West - and by Mountain West I mean Craig Thompson's whims - chooses where the remaining bowl eligible teams play. Boise State to the Poinsettia seems like a smart move because I wouldn't think the Vegas Bowl would want the Broncos back again and the Poinsettia is the next best option. Downside, the P-Bowl is the day after Christmas. Did someone say Christmas in San Diego? Hark the Herald Fish Tacos Sing.