Churchill trounced Roosevelt on Saturday night, and no that's not revisionist WWII history. The Churchill Chargers moved to 5-3 on the year after a 49-7 victory over Roosevelt and Flowers was a big reason why. The Boise-bound TE/WR had 2 TDs in the contest—1 rushing TD and a 57-yard TD reception. Flowers finished the night with 168 receiving yards and did so in front of a small Boise State rooting section who attended the game to get a glimpse at the future Bronco. They came away impressed with Flowers' athletic versatility and blocking prowess. The blurry proof is below. 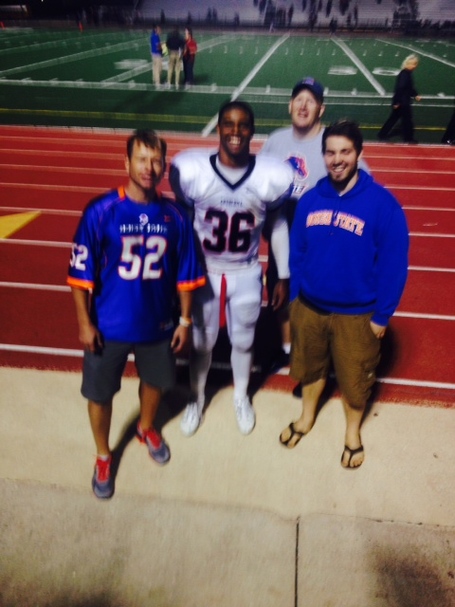 Churchill will take on Reagan this Friday. Article about Dimitri and his proud football lineage.

Serra got a big win over Cathedral on Friday night and remain unbeaten on the year (8-0). Greene threw just seven passes in the contest, but completed them all...and threw 3 TDs (and one INT) in about a half's worth of work. Greene also had 48 rushing yards. On the year, Greene has 21 TD strikes and just 4 INTs. Serra is now ranked 10th in the MaxPreps national top 25. Greene and company will take on unbeaten St. Francis this Friday.

Well, that was fast. About 5 days after Shay Fields assured Boise State fans that he wasn't swayed by a recent USC offer, Shay jumped ship and committed to...gasp...USC. Fields was one of the verbals I was most excited about so far, but alas, it wasn't meant to be. Both parties will now move on and his exploits will no longer be reported in this weekly round up. Best of luck to you, Shay—and no hard feelings.

Mission Viejo remains unbeaten after defeating Modster's younger brother and his Tesoro squad. Modster had a 31-yard TD reception in the 2nd quarter that was followed by a 30-yard score just 2 minutes later. Mission Viejo will play Trabuco Hills this Friday. Article about Modster brothers taking each other on.

Newport finished their regular season with a big win over Garfield on Friday night and completed their slate with a 6-2 record. Sample's stats were not logged for the contest. Newport received the third seed for next week's KingCo Crossover game.

With a 28-23 win over Jesuit on Friday night, Pleasant Grove stayed unbeaten with just two regular season contests remaining. Lewis rushed the ball six times for 118 yards and 2 scores in the win and also pitched in 3 tackles on the defensive side. On the year, Lewis has 39 carries for 444 yards and 8 TDs. Defensively, he has 11 tackles. Pleasant Grove takes on Oak Ridge this Friday night.

La Habra moved to 7-1 on the year with a decisive victory over Troy on Friday night. Gaines' stats weren't released for the win, but through the first 7 games, Greg had racked up 7 sacks. La Habra takes on Sonora on Friday night.

Rocky Mountain moved to 8-1 on the year with a 57-30 win against Borah on Thursday night. As has been the custom, Oliver's stats were not released, so hopefully at year's end we'll be able to give a full account of his exploits. The Grizzlies finish their regular season slate on Friday against Timberline.

Pearland continued their dominating ways on Friday night with a 52-6 win over Pasadena Memorial. The undefeated Oilers have now outscored opponents 416-27 and moved up to 18th in MaxPreps national top 25. They will take on Manvel on Friday evening.

Edison fell by a TD to Los Alamitos on Thursday night and moved to 5-3 on the year. They will take on Fountain Valley this Friday.