Powerful polls: Mountain West rankings and other polls for Week 9

Share All sharing options for: Powerful polls: Mountain West rankings and other polls for Week 9

The weekly Mountain West recap is changing so as to focus on what really matters: a horribly biased evaluation of all the teams. Behold the Mountain West power rankings in all their wrongheaded glory. Also, there are other rankings of lesser and lesser importance.

Explain myself: What to do with Wyoming? The wheels have completely come off their Ford Explorer of a season. They've lost to Colorado State and Texas State. They are no longer anyone's dark horse except maybe xx, which might be worse. Of Boise State's remaining ESPN conference games, the sexiness now belongs to "home versus New Mexico." That's weird. Wyoming falls five spots, Colorado State moves up two, and everyone else stays the same. Wyoming's inability to play defense is the only thing keeping me from copying and pasting these rankings.

For reference, here are the Mountain West conference standings - free from my bias (other than the huge, gold highlight for Boise State). 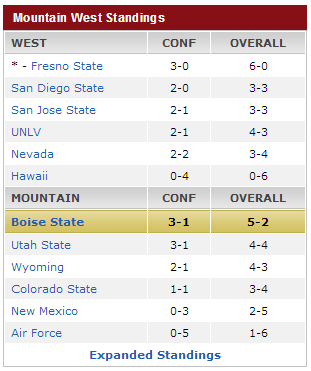 The top whatever of non-BCS teams

Explain myself: There are four good non-BCS teams (I won't count the Sun Belt until the Sun Belt makes me count the Sun Belt). Of the four listed above, a Hells Canyon divide exists between undefeated Nos. 1 and 2, and two-loss Nos. 3 and 4. That said, should catastrophe strike at the top, there is still enough football to be played where BYU or Boise State could climb to the fringe of BCS qualification and enact the troll rage of millions of college football fans. Fingers crossed? 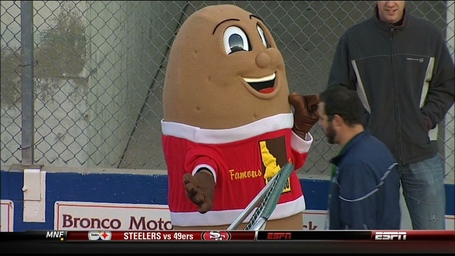 The above were ranked on likelihood, not personal preference. (Please, no Potato Bowl.)