Churchill remains at 4-3 on the year after a bye week, and will begin prep for a matchup with Roosevelt this Saturday night. On the year, Flowers has accounted for 908 yards off offense (686 receiving, 222 rushing) and 13 TDs. Flowers was in the house on Saturday night to watch the Broncos defeat the Wolf Pack. Sweet.

Greene led Serra to an impressive win over Chaminade on Friday night—winning a quarterback duel with Miami-bound (and USC-offered) Brad Kaaya in the process. Serra jumped on Chaminade early with a 76-yard scoring strike from Greene to UCLA-bound Jordan Lasley and never let up, handing the Eagles a somewhat surprising 36-0 defeat. Greene had 136 passing yards and 2 TDs in the win as well as 102 yards on the ground and another two scores. On the year, Greene has 1,375 yards passing with 18 TDs and 3 INTs. On the ground, he has 555 yards rushing and another 8 TDs. Undefeated (7-0) Serra will take on Cathedral this Friday night. Greene was in the house on Saturday night as well to watch the Broncos and the Wolf Pack...something tells me some of the students knew about his looming visit. 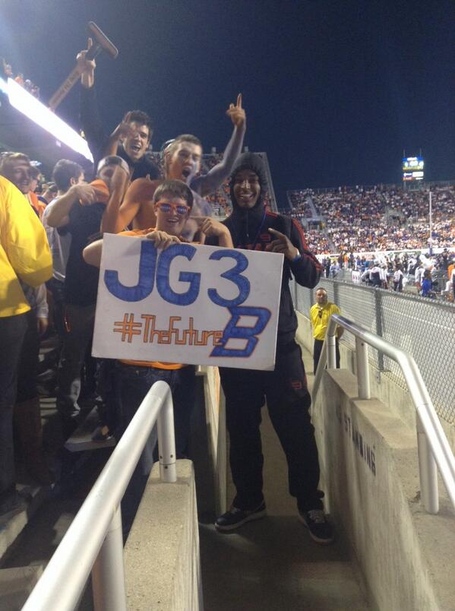 St. John Bosco moved to 7-0 on the year with a big win over Orange Lutheran on Friday night—storming back from a halftime deficit (sound familiar?) to remain unbeaten. We know that Fields had at least one TD in the win, but I don't have his full game stats yet. Going into the contest, Fields had 698 receiving yards (19.39 YPC) and 8 TDs. SJB will take on JSerra Catholic this Friday.

Mission Viejo also sits at 7-0 after destroying San Clemente 70-17 on Friday night. Modster's full game stats were not released for the game, but the box score indicates he had a 53-yard TD reception in the win. I'll get Modster's full season stats up as soon as I locate them. The Diablos play Tesoro (where Sean's little brother plays QB) this Friday night. Modster was also at Bronco Stadium on Saturday night.

Newport dropped their game with Skyline on Friday night to drop to 5-2 on the year moving them to .500 against their district slate. It doesn't appear that Sample registered any receptions in the contest, but he did make 4 tackles with 1 sack on the defensive side of the ball (at defensive end). Newport will close out their regular season next week against Garfield.

Pleasant Grove also finds themselves among the unbeatens after a 46-0 win over Ponderosa on Friday night. Lewis had 7 carries for 111 yards and 2 scores in the contest and also notched 2 tackles on defense. On the year, Lewis—who missed the first two games due to injury—has 326 rushing yards and 6 TDs, 2 kickoff returns for 65 yards and 8 tackles. Lewis' also took his official Boise State visit this weekend and this week will prepare for a matchup with Jesuit on Saturday afternoon.

La Habra moved to 6-1 on the year by stomping Sunny Hills on Friday night, 55-0. Gaines, as usual, was one of the defensive leaders for the team—I should have his full season stats shortly. Greg was in town this last weekend for his official.

Mann has officially de-committed from the Broncos and committed to San Diego State. According to THIS article, it wasn't anything the Broncos did, but rather a newfound comfort level in Calfornia after some upheaval in his personal life. Best of luck to Hawkins. No hard feelings.

Rocky Mountain improved to 7-1 after taking it to Centennial on Friday night. The Grizzlies jumped on the Patriots 61-14 and should set up well at districts in a few weeks. Rocky Mountain takes on Borah this Thursday night.

Pearland did not continue their shutout streak, but did extend their unbeaten streak—beating South Houston 56-12 on Friday evening. The 7-0 Oilers will take on Pasadena Memorial (TX) this Friday.

Edison defeated Newport Harbor on Friday and improved to 5-2 on the year. They will take on Los Alamitos this weekend.

Centennial took down King on Friday night and also improved to 5-2 on the year. Looking at his stats, it looks like Johnson might have sat a game or possibly two this month, but was back in action on Friday night notching 4 tackles and QB hurry. Assuming their was no lapse in stat reporting, Johnson has 48 tackles, 2 sacks and a QB hurry thus far this season. Centennial takes on Roosevelt this Friday.