Looks like the Broncos will be donning their goth combo tomorrow night against the Wolf Pack. Love Jay Tust using the word "fellas"—who does he think he is, Melvin Marsh?

One key to the Broncos' increased offensive output (up to 84 plays/game from last year's 67) is how the team is practicing. This year, practices are all done in montage:

With Aaron Baltazar going down with a season-ending knee injury, Jay Ajayi suddenly finds himself all alone in the RB spotlight. I'd say Ajayi is more than up to the task, but the Bronco coaching staff wants to allow him a breather here or there. That's where Derrick Thomas and Jack Fields come in. The new "2" and "3" backs didn't do much last week against Utah State, but Nevada's 121st ranked rush defense provides a chance for the backups to gain some momentum. 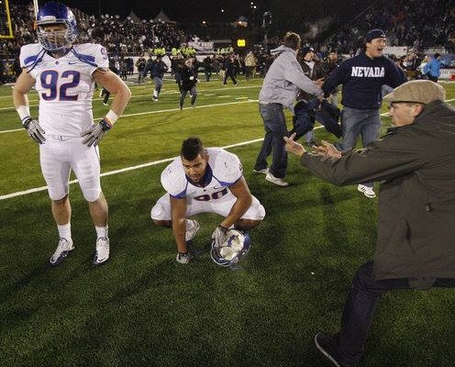