"The wise learn many things from their enemies." —Aristophanes

Why put on airs? I can't stand Nevada. If there's one team on our slate that I'm okay with booing, it's the Wolf Pack. In fact, I'm going to teach my 2 year-old how to boo tomorrow night. But I digress. You all know the drill by now, here's this weeks' Know your enemy.

10) Reno, Nevada got its start in about 1850 when some pioneers put down stakes in the fertile Truckee Meadows so they could siphon some money off travelers on the California Trail...and do a little farming (if they had time). Gold was discovered in nearby Virginia City right around this time, but the silver boom brought on by the Comstock Lode is what drew the bulk of fortune-chasers to the area...and businessmen that couldn't be bothered to get at some of that sweet silver themselves devised another way to get rich quick—gouge. Charles Fuller built a long toll bridge over the Truckee River and then charged miners and prospectors to use it—a "not drowning tax" if you will. After two years, Myron C. Lake came along and bought Fuller's bridge and improved upon the encampment that Fuller had set up to shake as much money out of would-be bridge crossers as he could. The tiny town (with great view of the bridge!) soon became known as Lake's Crossing—at the urging of Lake, no doubt— and when the Washoe and Roop counties merged in 1864, the town swelled in size. Was a SECOND bridge far behind? 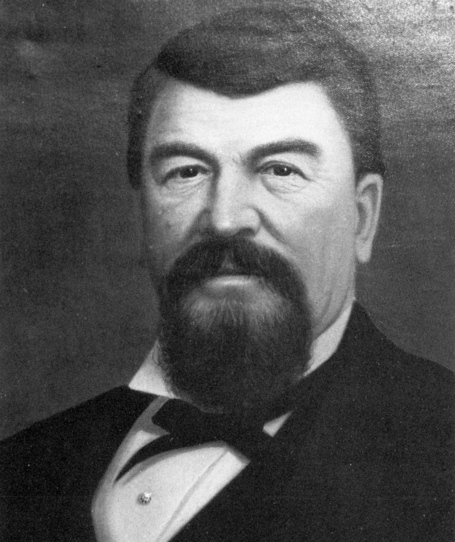 "A man and his toll bridge are soon parted. —Wayne Gretzky" —Michael Scott

9) Oh...we're still talking about this? Okay—when the Central Pacific Railroad started laying tracks east from Sacramento to eventually connect with track in Promontory, Utah, the intrepid Myron C. Lake deeded land to the CPRR with the stipulation that they build a depot in Lake's Crossing. "People will want to have a look at the bridge", Lake almost certainly posited, "and cross it as well—for a fee." So, the CPRR obliged Mr. Lake and built a depot there in 1868...but then allowed the railroad superintendent to rename the "new" berg...which he did—and it wasn't "Lake City", it was "Reno"—after Jesse Lee Reno—a Union officer killed in the Civil War NOT the proprietor of a very exclusive and popular toll bridge. The nerve!

8) The Nevada State Constitution established the State University of Nevada in Elko in 1874. The name was penciled in lightly on all letterhead and readerboards luckily, as they changed it to Nevada State University in 1881. As luck would have it, the school was also made of Papier Mâché, so moving the institution to Reno in 1885 was no problem. There NSU sat, just across a rickety old toll bridge, until 1906 when the powers-that-be renamed it the University of Nevada...and it remained the only 4-year institution in the state until 1965 when the Nevada Southern campus branched off into it's own entity—UNLV

7) Nevada played their first season of collegiate football in 1896 with coach Frank "Drillbit" Taylor at the helm. On October 24th, the squad won their first ever contest 30-0 against Wadsworth AC (an old air conditioner?), but then dropped their next two (and only) games of the year against Belmont Academy and Cal's JV squad. Taylor had enough after one season (or perhaps got dysentery) so the squad played just one coachless game the following year—a rubber match against Cal's JV, but lost yet again to the junior Bears. In 1898 coach F.F. Ellis took the reins and led the team to a respectable 4-1 record but again didn't feel like sticking around (or got scurvy), so the following year it was up to A. King Dickson to try to keep the momentum going...which he sort of did—posting a 3-2 record before skipping town (or being pulled apart by plow horses—it was the 1800s!). In 1900, James Hopper became the head coach, and he was determined to coach only one season like his predecessors...which was a rousing success. It wasn't until 1901 and the introduction of Dr. Allen C. Steckle that the squad actually gained their first multi-year coach. Steckle's longevity got him through 3 (THREE) seasons at the helm before he left to coach at Oregon State (or died of Spanish Influenza).

6) On October 15th, 1919 Nevada welcomed Pacific to Reno to play a friendly game of football. What actually occurred is now against the Geneva Conventions. Reno started scoring on lowly Pacific and decided they would not let up until their coach cried "uncle"—their coach had been bound and gagged, apparently because when the final whistle was blown, the man operating the scoreboard died of exhaustion (or Spanish influenza...it was going around). Nevada's biggest win of all-time was recorded that day—a 132-0 drubbing that Nevada coach R.O. Courtright later said was "like taking candy from a baby's shadow". By the way, a twelve year-old Chris Ault was in the stands that day and methinks that may have been the beginning of his love affair with Nevada football.

5) Since at least the early '20s, Nevada athletic teams have competed under the nickname "the Wolf Pack", but prior to that the school's sports clubs were known as The Sagebrushers, Sage Hens, and the fearsome "Sage Warriors" (when Paprika Warriors was already taken). Sometime around 1921 or '22, a local sports reporter referred to the spirited play of a Nevada team as a "pack of wolves" when he saw them gnawing on a deer carcass. The name stuck and by 1923, the student body had made the switch official. Nowadays, the Wolf Pack are represented by Alphie—an anthropomorphized wolf who took over cheering duties from his uncle Wolfie in 1999. In contrast, Buster Bronco only took over full time cheering duties for Boise State after his uncle Benny twisted his ankle during the 1987 Idaho game and had to be shot. 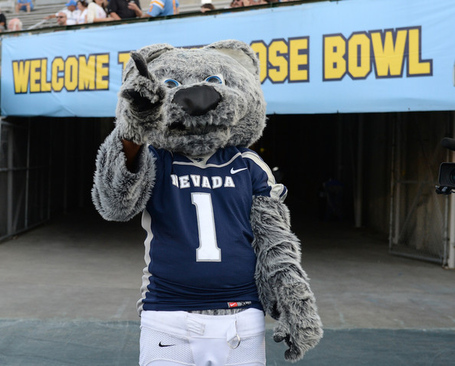 4) Nevada plays their home football games at Mackay Stadium (capacity: 29,993). The stadium is named after early school benefactor Clarence Mackay who would've been entirely uninteresting if he wasn't such an eccentric lad. Clarence Hungerford Mackay (Hungerford?) was born in 1874 to John William Mackay, an Irish silver miner turned telegraph magnate, and Clarence eventually inherited the lion's share of the elder Mackays $500 million estate upon his 1902 death. Mackay became quite good at philanthropy, and focused much of his gifting to the University of Nevada (hence the naming rights), but he also spent a little money in his day—funding an expansive collection of Medieval suits of armor. Mackay's first wife ran away with his doctor and the couple divorced in 1914, but Mackay—citing his religious convictions, refused to remarry his new squeeze (a soprano in the Metropolitan Opera) for 16 years because his first wife was still alive. Once he and his long-suffering flame finally did tie the knot in 1930, he gave her this ridiculous necklace which probably cost at least as much as several suits of armor. Oh, and Mackay disinherited his daughter Ellin because she married composer Irving Berlin (not a fan of "White Christmas" or Jewish people...my guess is the latter). 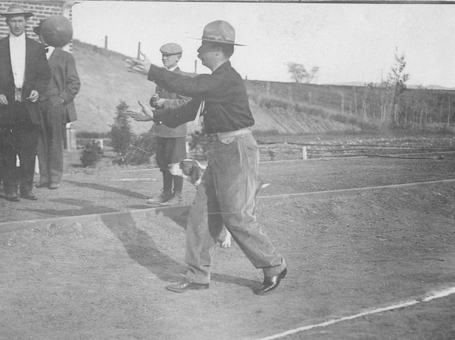 3) Washoe, the first chimpanzee to learn American Sign Language, did so at the University of Nevada in 1967. All told, Washoe was said to have learned over 350 words in ASL but for some reason only ever put the words "Get me out of Reno" into use.

2) The famous "Reno Arch" was erected on Virginia Street in 1926 to promote the Transcontinental Highways Exposition of 1927. After the exposition, the Reno City Council decided to keep the arch as a permanent downtown gateway, and Mayor E.E. Roberts (no relation) asked the citizens of Reno to suggest a slogan for the arch. In 1929, after a $100 prize was offered, G.A. Burns (George?) of Sacramento was declared the winner with "Reno, The Biggest Little City in the World". G.A.'s backup slogan was "That smell is totally normal". 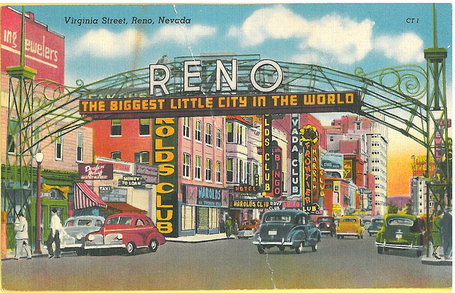 1) The "fight of the century" took place in Reno in 1910—a boxing match between undefeated (and retired) World Heavyweight Champ James Jeffries and "Colored Heavyweight Champion of the World" Jack Johnson. The matchup was a stunning display of racism from practically everyone involved, with Jeffries stating before the bout "I am going into this fight for the sole purpose of proving that a white man is better than a Negro." Well, Jeffries failed to prove much except that he made an excellent punching bag, and Johnson dispatched him with a TKO in the 15th round (in truth, it was a knockout, but Jeffries' corner, in essence, threw in the towel).

The old-timey "no standing 8 count" rule was amazing.