Predict the score for Boise State vs. Nevada

Share All sharing options for: Predict the score for Boise State vs. Nevada

With no Idaho on the schedule this year or in the foreseeable future, Nevada gets all our leftover hate to go with the gobs of hate we already have for the Wolf Pack. That's a lot of hate. Some of the following score predictions might reflect that.

Predict the score for Boise State vs. Nevada

Not sure how the Wolf Pack will be able to overcome the rigors of Nevada-Reno academia to be competitive in this one. Not sure they'll have an answer for Jay Ajayi either (Nevada is second-worst in yards per carry allowed). Boise State wins 42-17.

I'm probably being way too trusting of Boise State (like always), but Nevada lost to San Diego State and only beat Air Force by 3. Both games were shootouts. In response to his team's lack of effort, Coach Polian also mentioned that Nevada will be using plenty of new players/starters coming off the bye week. I don't think this will be pretty for them: Boise State 66 - Nevada 24

If the coaching staff posts this pic on the wall of the football facility...Boise State 47 UNR 13 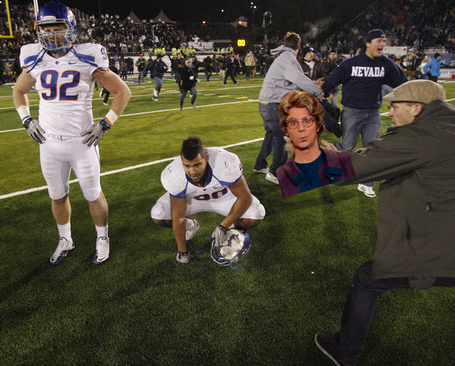 This used to be the game that I was worried about all season long. I never trusted Nevada to just sit back and take the Bronco beating that I really want them to have. The difference know is that they have lost their "Hall of Fame Coach" and their Super Bowl ostrich.

Think of the ostrich makes me long for the days of Austin, and Kellen, and Titus, and Doug, and Shea, and Billy, and Kyle (too soon?). Still, Ajayi makes me giggle, and as long as he can hold onto the ball, I don't think there is any chance that he runs for less than 150 yards in the first quarter. I also expect Shane Williams-Rhodes to have 2 sacks. That's right, SWRV is going to sack Fajardo...twice. Broncos win 41-20. Petersen uses his timeouts after he has taken a knee and then scores on the next play.

It's always too soon to mention "field goal" to a Boise State fan. Fortunately, we play Nevada at home this week, and our goal posts are regulation height. Just to prove it, Coach Pete sends Goodale out for a field goal at every chance he can. Also, with the Wolfpack "run defense" in town, I'm sure Ajayi breaks the single-season rushing record in the first quarter.

Fewer things in life give me more joy and pleasure than beating the bejesus out of Nevada. One of them is laughing that Reno is regarded as a better place to live than Boise by a magazine that is clearly run by a group of crazed gerbils.

That said, Nevada's run defense is atrocious, and Cody Fajardo suffers more injuries than a normal human should (making up for Kaepernick's annoying ability to always stay healthy).

This has nothing to do with my prediction, I just enjoy poking fun at Nevada whenever I get the chance.

Does anyone dare top Nate's 126-2 prediction? Be as realistic or homeristic as you want with your prediction in the comments.