Share All sharing options for: The Mountain West Week 8 preview and power poll

Boise State's road to the Mountain West championship game looks like this: Beat everyone. "Everyone" includes Nevada this week, Colorado State, Wyoming, San Diego State, and New Mexico - all of whom the Broncos will be favored to beat. It's nice controlling your own destiny and having Colorado State on the schedule. (Ditto for Wyoming - both the destiny part and the Colorado State part.) 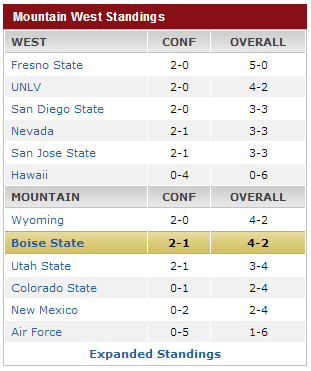 Recap: UNLV has won four in a row. Yes, that UNLV.

Recap: Boise State's 11-point win was the biggest blowout of the weekend, as every other MW conference game was decided by one score. Parity or Craig Thompson conspiracy to boost TV ratings? Is Norm Chow on the take? 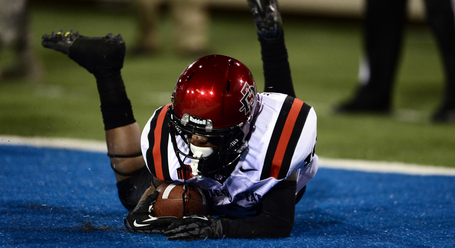 San Diego State started the season 0-3 with two okay losses (Ohio State and Oregon State) and one very bad loss (directional Illinois), but they've rebounded nicely and are now 3-3 and the current favorite for Fresno Trap Game of the Year. Last week, the Aztecs got past Air Force 27-20 on Friday night football, and now they have a full 15 days to prepare for a visit from the conference-leading Bulldogs who must play hot-hot-hot UNLV this week. (Actual UNLV temperature may be cooler than it appears.)

The official player of the week award went to San Jose State quarterback David Fales, but we all know the winner should have been Shane Williams-Rhodes. There is a pervasive pattern of heightism at the Mountain West football offices, and it must be stopped.

There are only four games total to choose among in Mountain West play, so take "Game of the Week" with a grain of salt. The Runnin' Rebs are riding a four-game winning streak, but lest I remind you that win No. 4 was by two points over winless Hawaii. Coincidentally, Fresno gave up 34 unanswered points to Hawaii. Is Hawaii secretly the best team in the conference? You heard it here first, unless it isn't true, in which case you heard it on Bleacher Report.

Battle for All the Kenos: Nevada @ Boise State

I loaned the game to a friend and spent the week playing Mario Tennis (since I know you'll ask, yes, people other than me still own Gamecubes). Sorry, no lofty nuggets of wisdom this week, unless you consider Wario vs. Peach a metaphor for Boise State vs. Nevada, in which case, Peach better watch out.