Now that the college football season is officially over—signified by Brent Musberger creepily ogling AJ McCarron's girlfriend—we can now put a nice bow on our 2012 season by selecting the 2012 All-OBNUG team. This will be the last real scrutiny of the 2012 season-at-large. There will be no recounts.

Offensive Player of the Year

DJ Harper - Harper accounted for 1,300 total yards of offense this season and 16 TDs...and he did it behind an O-line that forgot to block in several games ("slipped our minds"). Harper had to wait a while, but his 6th year was certainly his finest.

Defensive Player of the Year

Demarcus Lawrence - Lawrence notched 9.5 sacks in just 11 games and sprouted white hairs on offensive coaches heads across the league. Lawrence was an All-MWC first teamer and had Fresno State's Philip Thomas not gone interception-crazy, might have made league DPOY.

Bronco Coach of the Year

Pete Kwiatkowski - Coach K was phenomenal this year. Smart money would say that too many defensive stars were lost in 2011 to field a top D in 2012, but Kwiatkowski did it anyway. Boise State finished the season 12th in total defense, 8th in scoring defense, 6th in pass defense, 4th in turnovers gained and 1st in fumbles recovered. Oh...and he did it without even half as many "stars" as the 2011 defense boasted.

Demarcus Lawrence - Sure, he had the benefit of a year of JC ball, but it's easy to forget that Lawrence is just a sophomore and quite new to the Bronco system and D-1 ball in general. If he can find a way to not get suspended next year, he could put together a ridiculous 2013 campaign.

Freshman of the Year

Jay Ajayi - I'm not Tom Scotty enough to know where Ajayi's 548 yards and 4 TDs rank in Bronco freshman history, but I've got to think his 6.7 YPC average is near the top of the record books for a redshirt frosh. Ajayi's bruising style has me geeked to see what he can do as a feature back.

Surprise Performance of the Year (Good)

Darian Thompson - After hearing next-to-nothing about Thompson after LOI day and through his redshirt year, he ended up splitting time with Lee Hightower in the opener against Michigan State, made 6 tackles and recovered a fumble. Thompson's playing time grew and grew as the year progressed (thanks, in part, to Hightower's suspension), but the secondary hardly skipped a beat. Thompson finished the year with 41 tackles, 3 INTs, 3 PBUS, and that fumble recovery.

Surprise Performance of the Year (Bad)

Offense - While things clicked at times and hit a good stride towards the end of the year, the 2012 Bronco offense wasn't even in the same stratosphere as past offenses. The Broncos failed to score a single offensive TD in TWO games this season and seemed to struggle mightily to punch finish drives early in the season and in second halves throughout. It was quite the headscratcher.

Breakout Performer of the Year

Jeremy Ioane - Sometimes the hype machine can be too much for a player, and after Ioane's freshman season, some questioned whether that was the case. Ioane silenced all doubters in 2012 with a fantastic individual performance. Jeremy played well all year long, and book-ended the season nicely with a pick-six in the opener and a game-sealing INT in the bowl finale. On the year, Ioane made 64 stops and 4 INTs (yes, I'm counting his G.O.A.T. pick against Nevada), and maybe more importantly, his face painting scheme was second to none. 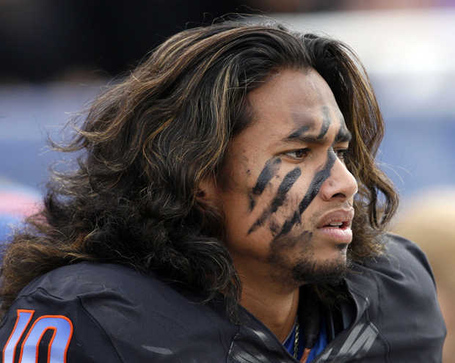 (Tie) Shane Williams-Rhodes, Michael Frisina - Williams-Rhodes—also a slam dunk recipient for "best player with a hyphenated last name"—didn't put up huge numbers on the year (239 yards-from-scrimmage, 3 TDs)...but he did make opposing defenses account for his...well...scariness. And hey, that 4th quarter kick return against the Huskies was well-timed, to say the least. Frisina was Mr. Clutch in the Bowl game, drilling 3 FGs against UW, including the game-winner and was pretty close to automatic from inside 35 yards this year.

Walk-on of the Year

Matt Paradis - Paradis was a walk-on defensive tackle out of Council, Idaho a few short years ago, and in 2012 was the only Bronco to land on the All-MWC Offensive first team. Bonus points for the ginger mullet-fro combo he was rocking at the beginning of the year. Magnificent. 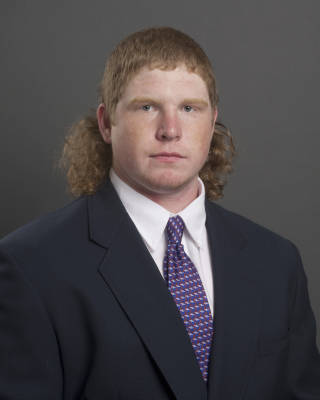 Mustache of the Year

Joe Southwick's - The Southstache might have brought the Broncos the necessary karmic activity to finish their season in the proper fashion and it was everything a mustache should and shouldn't be. It was dark, but not dense...ugly, but not creepy...tacky, but sophisticated. It was all things to all people and we loved and hated it.

Best Game of the Year

Maaco Las Vegas Bowl - This is not to say we played the best in this game, but I liked the offensive and defensive playcalling, loved the heart the Broncos showed when the going got tough, and was impressed with the Broncos focus despite having several starters out and being in a very distracting environment.

Was Southwick's so-bad-it's-good mustache your highlight of the year, or are you more of a wins and losses sort of person? I wish I could give awards to all of our Broncos, but our budget is very slim.