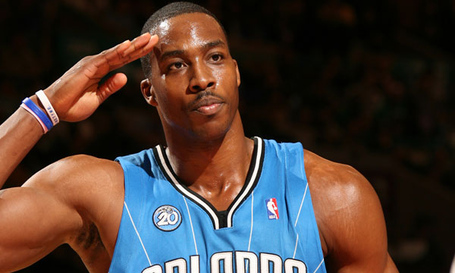 "I salute you... it's harder than it looks." - Dwight Howard

Derrick Marks had 30 points, Anthony Drmic had 23 with some clutch baskets down the stretch, and Ryan Watkins notched his fourth double-double in five games with a 10 point/18 rebound night.

On the depth front, Kenny Buckner was back, but Jeff Elorriaga hit the floor hard in the first half and failed to return after halftime. In addition, Thomas Bropleh missed the game with a reported wrist injury.

Attendance sunk to 4,862. I blame it on the nightmarish unseasonably cold temperatures in Boise, not the Broncos recent two game slide. Two road games await the Broncos before they return to Taco Bell Arena Feb. 2 to play UNLV.

If you didn't know, Dwight Howard is really, really good at free throws.