Hey look, someone gets it...

Boise State's "return" to the MWC was thanks in small part to the MWC's concessions, and thanks in large part to the Big East's bumbling. At least one writer realized this...we're just here to agree.

Share All sharing options for: Hey look, someone gets it...

Boise State's decision to stay in the Mountain West was reluctantly embraced by most Bronco fans, who understood the rapidly degrading Big East didn't hold much over a begging and pleading MWC that gave us nearly everything we wanted to return. Bob Kustra may have come off shrewd to some (looking at you, Navy and Tulane ADs)...but his wrangling insured that, while the MWC may not be a long term solution, it can at least serve our needs for the foreseeable future. BCS 2.0 is on its way, 16-team mega-conferences may be looming, and now the Broncos get a little of the dough they've earned without having to send their Olympic sports to far-flung locales. So, I think most would agree that Boise State's dealings were done with the school's best interests at heart, but not everyone has been willing to look at just what the Big East did wrong in this whole shuffle. Blogger Richard Gines nailed it in his article "How the Big East lost Boise State - and potentially the top 'other' conference war". If you haven't yet read this article, do so now...it deserves the full Fiskers treatment, but in reverse.

Given that Kevan has taken Mr. Fiskers to a thyroid specialist in Stuttgart, I'll gladly deploy Yeppers, the agreeable Dachshund to affirm the spot-on-ness of this article. Yeppers, won't you introduce yourself? 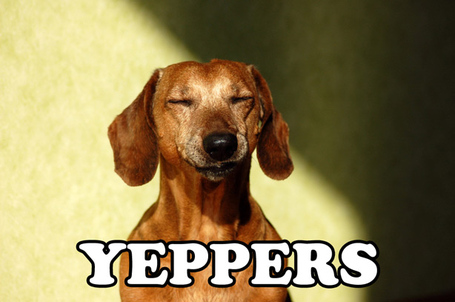 The main thrust of Gines' article is that the Big East's failures in 4 key areas forced Boise State's hand with their "return" to the MWC. The first of these failures, according to Gines was that they didn't sell out to admit Boise State to the conference early:

"In early 2012, with defecting West Virginia getting an early release from the conference the Big East needed to expedite adding one of its new members. A prudent businessman at this point would throw their weight to bring in the most valuable piece first.

...Instead, in the Big East worked to add Temple, a program so valuable to the league that in 2004 it was un-imaginably voted OUT of the conference."

By allowing Boise State early entry, and defraying Boise State's exit costs, the Big East would be selling Boise State games to prospective TV rights holders as we speak. Instead, they expedited the addition of Temple, who went 4-7 this season and is Temple. Wouldn't you say that first step was a doozy for the Big East, Yeppers?

Secondly, Gines suggests that the Big East's western footprint was pretty much a non-starter from the get-go as it sought only football membership from its western flagship universities:

"While Boise State publically claimed they were happy with the football only invite to save travel expenses for their other sports, the challenges of trying to find a place to move their other sports was a nightmare for BSU. They really had no leverage and it basically forced BSU to allow themselves to be blackmailed by a greedy Big West. And what of the travel? As it turns out, travel would not have been much different. The football team’s first year in the Big East (2013) would have actually traveled LESS miles than their last year in the MWC (2012)."

The irony here possibly being that the schools that the Big East did extend all-sports offers to so enraged their base basketball schools (the so-called Catholic 7) that they promptly resigned from the conference. I suppose it's doubly ironic that the MWC is now viewed as possibly the 2nd best b-ball conference, from top to bottom, in the country this year. That about cover it, Yeppers?

Gines third bone-of-contention with the Big East focuses on their lack of a true plan for Western expansion. Boise State and San Diego State were supposed to gain western partners in short order with the expanding footprint of the Big East—which is, of course, why the Big East promptly extended offers to Tulane? Take it away, Richard Gines:

"Shortly after adding BSU with the promise of future Western expansion, the Big East went "West" by adding schools like Temple, Navy, Memphis and Eastern Carolina.

...it did plenty to anger Boise State by adding several bad football schools none of which were within a time zone of BSU."

We understand that the upcoming departures of Rutgers and Louisville left a void in the conference that desperately needed filling, and the TV contract negotiations needed a shot in the arm that only Boise State was really providing in the short term. The Big East, with no forethought whatsoever, invited Tulane and East Carolina. If they were looking for a "value add" or something that said "western expansion"...the Big East failed miserably. Agree or disagree, Yeppers?

I'm not sure that response works this time, Yeppers. Do you agree or don't you?

Point four of Gines' article focuses on the Big East's lack of financial creativity. Boise State made no bones (wink) about the fact that their move to the Big East was driven by 2 things, 1) money, and 2) money. The MWC's TV deal, while marginally better than the WAC's money-wise, was failing Boise State in other ways, like exposure. The Big East's new TV deal was supposed to at least double BSU's yearly financial haul AND potentially get them weekly televised games on networks that people have heard of. So, how did the Big East handle their new bargaining chips? Not well, sayeth Gines:

"...The Big East gave Boise State a chance to move up in that category. But as additional teams continued defecting the television contract lost more and more ground and Boise State was soon facing the same dilemma with the Big East that they had with the MWC: Boise State using their brand name and TV ratings to split out with multiple teams leaching off it, diluting BSU to not get anywhere near what they were worth."

In other words, Boise State went from Big East value add to the only team adding value to the Big East. Pitt, WVU, Rutgers and Louisville were gone or soon to be—the Big East now needed Boise State much more than Boise State needed it. And look over here...the Mountain West also needed Boise State! What's an intrepid college president to do? Well, make the conferences vie for their services, naturally. Boise State, at this point, knew that they'd be a key-selling feature for any TV deal and would need some perks to assure that their hard-earned place in the football landscape was not in vain. The MWC, wisely, said "we can do that"...the Big East said we were "unreasonable" or worse. Oddly enough, Boise State's sweetheart deal with the MWC will also benefit their conference mates, making them much less the primadonna that disgruntled Big East presidents are making them out to be. Meanwhile, San Diego State, now unburdened with an exit fee thanks to Boise State, looks like they may be following our lead as well.

So to recap, Boise State's Olympic sports stay together, their conference is a geographic fit AND they get extra dough. Slam dunk, right Yeppers?

I couldn't have said it better myself.

Still think Boise State's decision to stick with the MWC is a bad idea? Let us know why. Either way, Yeppers heartily agrees with you.