Believe it or not, New Mexico has Impact Players. I know, it's hard to believe. But by definition, Impact Players help a team win. And somehow, New Mexico has managed to win half its games this year. Granted, they're only 4 games into the season. And their wins have come against D-1AA Southern University and WAC cellar-dweller New Mexico State. But let's not get bogged down by the details.

Yet again, the strength of our opponent lies in its Defensive Line and Linebackers. At least it's giving us a good test of our offensive skills. We are passing the test aren't we? Aren't we???

New Mexico has a ball-control offense that likes to ground and pound. Last week, Coach Davies moved to a wildcat formation in an effort to supplement the running game. Be on the lookout for more of the same this week. Wildcat!!! Wildcat!!!

The Lobos will probably try to limit our scoring by keeping our Offense off the field with this "superior" running game (laugh/cough)... although that strategy may not be in their best interest. (don't anyone tell 'em our defense is actually our offense this season.)

As for veteran "Impact Players", New Mexico has a crop of Seniors who found New Mexico "the old fashioned way"... by starting off at a University of their dreams, realizing they would never get enough playing time, and subsequently transferring to somewhere near the bottom of the D-1A pile where they could actually play. Well, maybe it's not really the old fashioned way. But it works for New Mexico. I mean hey, who can argue with a record of 2-2?

Reggie Ellis is one of these transfers, and if he has his way with things, he'll be clogging up our Offensive Line all day. 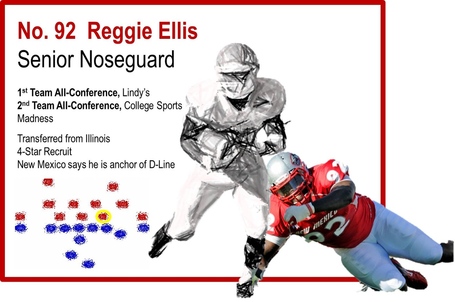 Stopping the run is Mr. Ellis' mission. If Boise State decides to pound the rock, expect Reggie to have a busy afternoon. Hopefully his workout won't come from tackling DJ, but rather from picking himself up off the ground after trying to tackle DJ (illustrative picture above).

Defensive Lineman Ugo Uzodinma is another BCS transfer; Ugo and Reggie were teammates in both high school and in college. Kinda cool they have stuck together all these years. Too bad for them they ended up at New Mexico. 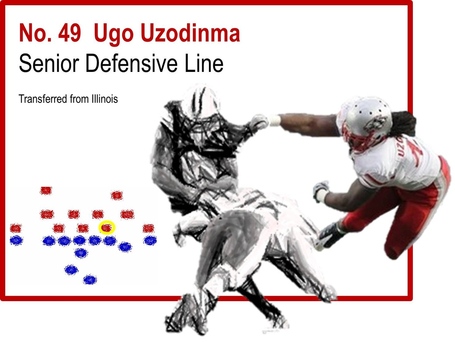 Ugo may not have quite the talent his buddy Reggie does, but he's still one of New Mexico's best players. He provides muscle to New Mexico's best unit: its 3-4 package of D-linemen and linebackers. Again, let's hope Ugo has as much success tackling our players as he did whiffing on the player above. (Don't you love Google?)

Joseph Harris might be New Mexico's best player, but I put him down here since he would have otherwise screwed up my seque about BCS transfers. Gotta have our priorities. 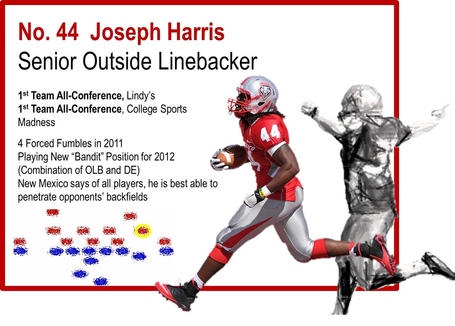 Mr. Harris is the glue that binds New Mexico's 3-4 unit. He has played both Defensive End and Outside Linebacker at the D-1A level; this new "Bandit" position is a combination of both. It will be interesting to see how they use him, as his position allows him lots of defensive flexibility. If he starts doing something crazy, can we start yelling "Bandit! Bandit!"? If so, we've gotta get ourselves a "Bandit" package 'cause I'm dyin' to do it at a game.

Our weekly "Impact Players" list would not be complete without at least one offensive player. This week, that honor goes to New Mexico's Kasey Carrier. Kasey's one of those guys whose name fits him well. (Kind of like my mechanic, Mr. Goodwrench.) 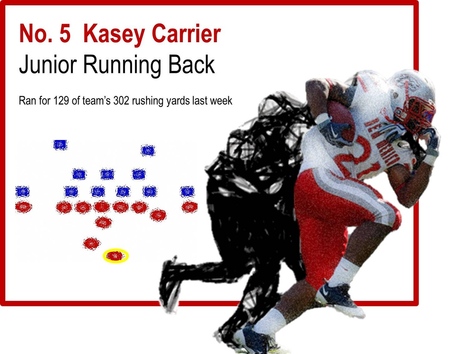 He's athletic, shifty, and ready to run. An injury kept him out of the lineup last season and he seems to be making up for lost time. He ran for a career-best 129 yards last week against rival New Mexico State. Unfortunately for Mr. Carrier, if our defense plays up to its billing, Mr. Carrier might have a hard time breaking the 29 yard mark.

New Mexico has not beaten a ranked opponent since 2003. If our Boys in Blue limit the impact of the players listed above, we have a good chance of keeping that streak alive and leaving Albequerque with a win. Here's hoping each team plays hard, no one gets seriously injured, all the guys on both sides have fun playing, and of course --- Boise State wins!