The situation: Third and six from the BYU 38 yard line, on the Cougars' first possession of the second half

BYU showed a three receiver (trips) formation to quarterback Riley Nelson's left, with a running back aligned to Nelson's right. Boise State countered with a pressure look: CB Jerrell Gavins sneaked down from his spot on the slot receiver and showed blitz. 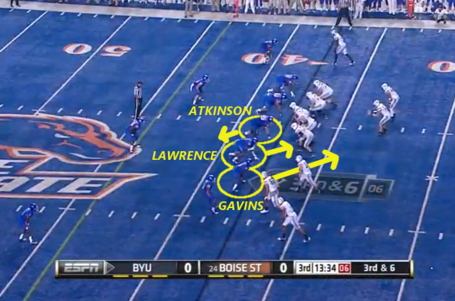 Gavins' blitz forced the BYU tackle to kick out and take Gavins, which had a trickle down effect to the guard who tried to block Demarcus Lawrence and the center who would have blocked Atkinson. Lawrence leaped over the guard's cut block attempt and stormed Riley Nelson.

The pressure in Nelson's face made him get rid of the ball early and blindly because, hello, there was a 300-pound man standing in the passing lane.

How did he get there? Atkinson, who was supposed to loop behind Lawrence and rush from the outside, got halfway through his loop and saw that Nelson was about to throw. He dropped into the passing lane, and voila! Fat Guy Touchdown. 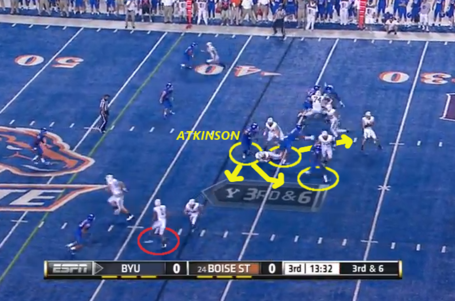 As you will see in the below screen shot, Nelson's man was open (and probably would have got the first down), but the world doesn't run on woulda, couldas. Atkinson's instincts put him in the right place for the pick, Lawrence's pressure forced Nelson into a quick throw, and Boise State's coaches coached 'em up and drew 'em up for success. Hugs and handshakes all around. 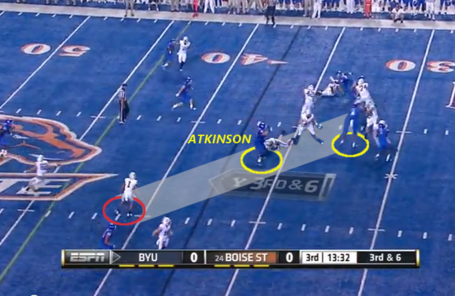 This play failed, in large part, due to Atkinson's immediate pressure into the backfield. He blew up the block of the offensive guard, a poor old soul who never had a chance. Atkinson was lined up at the snap over the guard's outside shoulder, so not only did the guard have to keep 300 pounds of Atkinson out of the backfield, he had to move laterally and with poor leverage to do so. On top of all that, Atkinson anticipated a rollout to quarterback Taysom Hill's right and therefore took his first step that direction. So tough noogies on that one, BYU guard. 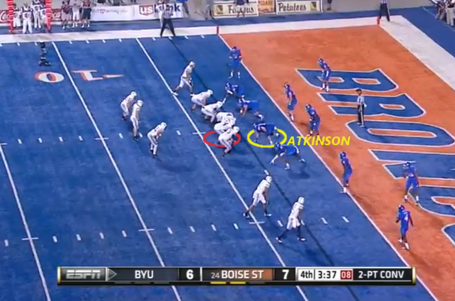 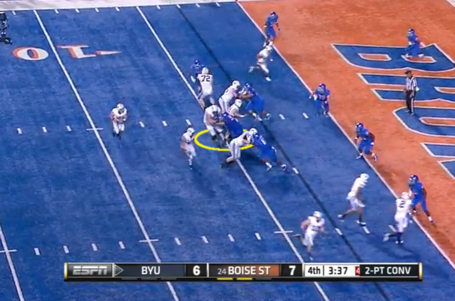 In an instant, Atkinson was nearly 10 yards deep and in Taysom Hill's face. The play design, rolling Hill to the right, gave the BYU quarterback the option to throw (meh) or run (preferred), but Atkinson's pressure took the run option away. It also made Hill take a little off his pass as he threw off balance into the end zone. 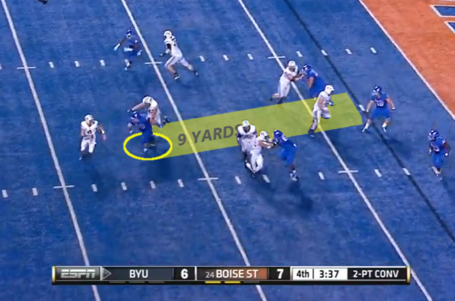 In screen grabs unrelated to Mike Atkinson, notice how far away J.C. Percy was from the intended receiver when Hill released the pass and how much ground he covered to get a hand on the ball.

(Note: Percy was spying Hill on the play, which is why it looks like he's not covering anyone.)

(Note also that the receiver was wide open.) 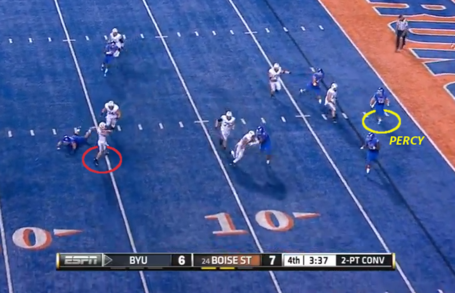 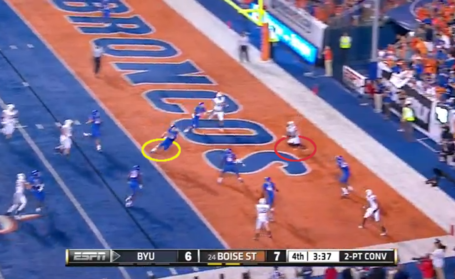 Boise State's fake punt was one block away from working like gangbusters. That one block belonged to linebacker Blake Renaud who, instead of blocking, played movable object to BYU defensive end Ezekiel Ansah's irresistible force. Ansah shrugged off Renaud and easily tackled J.C. Percy for the turnover on downs.

In related punt return notes, Percy was told later that BYU players were yelling "fake" on the field. He did not hear them. Still, the play had a chance, and I think neither Percy nor Chris Petersen regret the call.

I'm just going to leave this here without explaining it too much. This is the basic running play that Boise State ran with the most success against BYU, including D.J. Harper's 35-yard run. It is a variation on the double-pull that is a staple of the Bronco ground game. 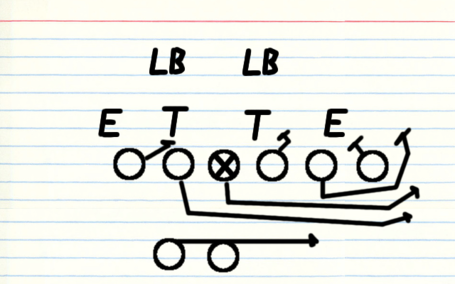 Got any questions you want answered in the Boise State playbook? See something interesting you'd like to share with others? Feel free to leave a comment.