Well, the Broncos dropped their opener on Friday, but showed some signs that the year might not be a total bust. Meanwhile, Boise State's current crop of 2013 recruits started their final prep campaigns and are looking good across the board. Each week, I'll update you all on their progress and their accomplishments...any tips (not the monetary variety) would be greatly appreciated.

Join me after the jump for stats galore to see how our soon-to-be Broncos are doing in their collective senior seasons.

Finley's season is off to a killer start as he's engineered two (2) last second, game-winning TD drives in Paradise Valley's first two games of the season. On August 24th, Finley's late game heroics led his squad to a 32-29 win over state power Saguaro and then on Friday night, he did it again—throwing a TD toss with 10-seconds left on the clock to seal a 14-13 win over Coconino. Through two games, Finley has 694 passing yards and 6 TDs, with just one interception. Finley has also rushed for 44 yards on the young season. He'll lead Paradise Valley against Liberty on the 6th.

Martarano's Fruitland team is also 2-0 on the season after defeating Middleton 30-15 in week one and then handing Ontario a 58-7 loss on Friday evening. In game one, Martarano—who also plays QB—ran for 102 yards and 2 scores. He was ejected from game 2 against Ontario early on for reasons I've yet to find.

As Martarano's Fruitland teammate, obviously Dhaenens also sitting at 2-0 on the year. No stats have been found yet for Dhaenens, who also plays DE for the Grizzlies. I'll keep digging. The Grizzlies will travel to California this week to play Casa Roble.

Austin's Chino Hills squad is 1-0-1 on the year after defeating Arlington 41-20 in week one and then playing Bishop Amat to a 48-48 tie on Friday evening. Austin has 4 receptions for 82 yards on the year, although 80 of those yards (and a TD) came against Bishop Amat. Chino Hills will battle Tesoro on the 7th. Here's a pic of Austin in action of Friday night (he's in green): 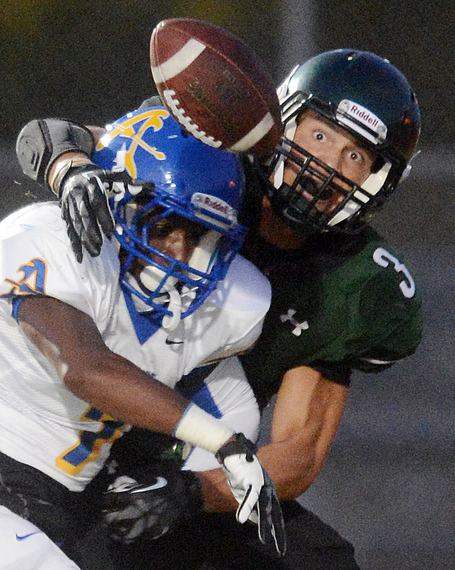 Vallejo's squad is 2-0 on the year after defeating McQueen 27-10 on the 24th and dropping Grant 37-7 on Friday. Vallejo is already putting up big numbers early in the season and has racked up 20 tackles thus far and a fumble recovery. On offense, Vallejo has rushed for 62 yards on 11 carries. Nevada Union will play Pleasant Grove this weekend.

Miles' team is 1-1 on the season after winning their opener against West Jordan 28-0 but dropping their Friday night game to Alta 16-17. Despite the mixed results, Miles—who will go on a church mission before joining the Broncos—has put up impressive stats. In his two games, Miles already has notched 4 sacks and 12 total tackles. They'll play Layton next.

Boesen's West team opened with their season on Friday night with a 30-25 win over Culver City. No stats have been logged yet for Boesen, who's expected to play linebacker or DE for the Broncos. I'll keep digging, but in the meantime, West will gear up to play Torrance on the 7th.

Stats are rarely kept for O-lineman, so don't expect to see a lot of numbers on Tercek. I will, however, keep you all apprised of his team's progress for the year and so far, so good. Tercek's team is currently 2-0 after defeating Floresville and Jay in weeks one and two. Next week, the squad will battle Marshall (not the university).

McCullough's Rocky Mountain team opened their season on Thursday night with a win over Timberline, 27-14. The Grizzlies will play Vallivue next.

That's it for this week...but hopefully we'll be adding to our list of recruits as the season wears on. f you have any stats, info, or otherwise to report, I would greatly appreciate it. Just send HERE.