Choosing this week's list of Impact Players was difficult. BYU has a lot of talent; some of it is not where you'd expect to find it. For years, BYU has been known for its offense. In particular, its quarterbacks. Of course, the Cougars still have an elite quarterback. But surprisingly, they also have strong players on the other side of the ball.

BYU's defensive line and linebacker unit are one of the best in the country. They're skilled, and they're experienced. Watching them play Utah last Saturday night, I have a whole new respect for BYU's defense. The Cougars shut down the Utes' offense in the second half. If they do the same against our Broncos, we're in big trouble.

Because BYU's defensive line and linebackers are so good, I almost made their entire unit this week's "Impact Players". But BYU has too much talent spread across its team. Plus, I decided it best to stay true to the theme of this series and showcase the best of our opponents' premier players.

While BYU is stacked with defensive talent, Junior Linebacker Kyle Van Noy is the cream of the crop. He's on the watch list for not only the best interior lineman of the year, but for the best overall defensive player of the year too. Yes, he's that good. 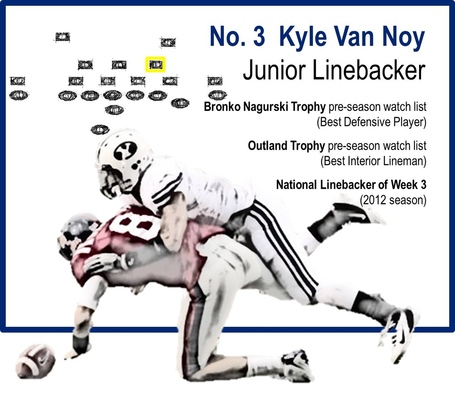 In three games this season, he already has 4.5 sacks and 7.5 tackles for loss. Kyle has "Impact Player" written all over him. Against Ole Miss last year, he won the game for his team by forcing a fumble, recovering it, and taking it into the end zone for a thrilling 14-13 victory. Against Tulsa in BYU's bowl game last year, Kyle recorded 5 tackles for a loss, forced a fumble, and had two sacks. When the lights are on, Kyle shines. Let's hope our offense can contain Mr. BYU Defense.

On offense, Quarterback Riley Nelson is a dual threat who is difficult to contain. When the other team's defense shuts down his receivers, he's more than happy to take off on the ground to pick up yards. Twenty percent of hisall-purpose yards have come via running the ball. Our linebackers will have to keep a close eye on him - especially on third down. 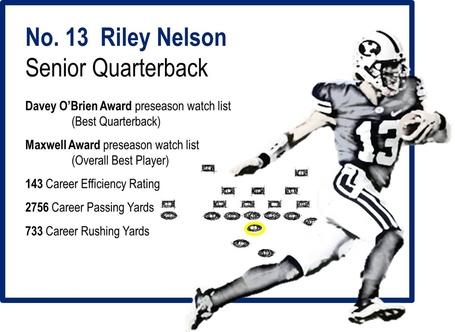 Like Van Noy, Nelson is not afraid of the Big Stage. During last season's Armed Forces Bowl, BYU trailed Tulsa in the final minutes. Facing 4th and 9, Nelson rushed for 14 yards to keep his team's chance of victory alive. Later in the drive, he passed for the winning touchdown with only 11 seconds remaining. Riley Nelson was clutch. Let's hope we contain him during clutch time here.

On special teams, punter Riley Stephenson brings game. If the contest turns into a defensive battle of field position, watch for Riley. Stephenson is one of the nation's top punters and could pin us deep in our own territory with his accuracy and leg strength. 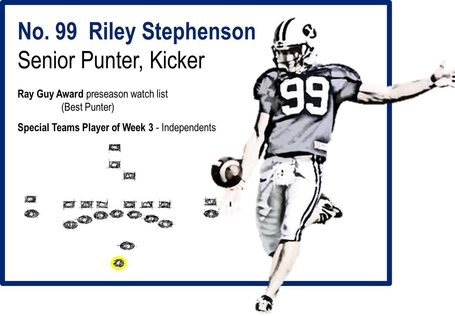 With BYU's first string kicker out of commission this season with a back injury, Riley Stephenson has also stepped up to fill the role. He almost saved the day for the Cougars last week, barely missing a final-second game winning field goal when the ball hit the upright. If he is given the chance again this week, let's hope he does not redeem himself.

One does not usually think about an Impact Player being an offensive lineman. But when you've got one of the nation's top dual-threat quarterbacks, making sure he is protected in the pocket and in the running lanes becomes even more important. Currently rated the nation's 8th best Offensive Guard for the 2013 NFL draft, look to see how well our Broncos can crash through Braden Hansen's blocking. If Braden does well, the chance that Riley Stephenson will too increases. We must put pressure on Stephenson. Even if it means going through Hansen. 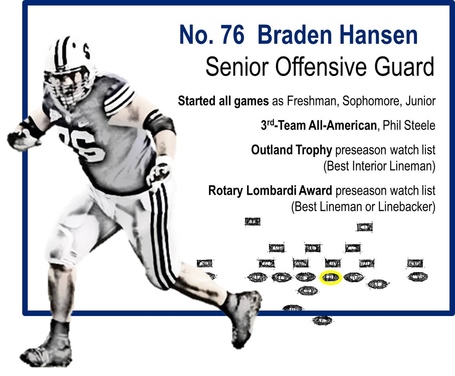 BYU should be 3-0. The Cougars dominated Utah, but gave away the game with costly turnovers. They beat themselves. If BYU can maintain their level of play and reduce turnovers, our Broncos could lose their second game in three attempts.

Coach Pete will have our young men prepared to match up against our rivals to the South. Here's hoping our Boys in Blue execute with precision, both teams walk away without serious injury, and everyone has fun. After all, it's only a game! Go Broncos!

One more note... During this week's research, I was astounded at the level of character BYU has on its team. Of course, we all know that BYU is a Mormon school, and that the majority of its athletes sacrifice two years of their young lives to go on a mission. And there's the infamous "Honor Code", with its exceedingly high standards of moral conduct for all students to follow.

But I did not know how far BYU athletes' character extended beyond these bounds (as if they weren't enough already.) Time after time, the football player Bios included "Eagle Scout". Yes, Eagle Scout. Eagle Scout is no small achievement. It requires years of dedication. And it instills in young men a sense of social responsibility and proper behavior. I for one will be clapping for these young men as they enter the stadium. As usual, I will wish for both sides of the ball to play well and stay injury free. But this week, I may clap just a little bit more as our opponent enters Bronco Stadium. These kids have my respect no matter what they do on the field.