Thought No. 1: What is it with people and Joe Southwick?

In a Tom Scott Scott Slant this week, the following words were e-uttered:

Everybody still wants to know what Petersen thinks of Joe Southwick's play. All indications are this is a very important week for the junior quarterback.

There is subtext to be had there, and let me be clear that it is not subtext that Tom Scott intended. Tom Scott is a smart man who in no way thinks "very important week" means "play well or else." But that won't keep many, many Boise State fans from using that sentence as fodder for their theories that Joe Southwick is not the answer.

How is this a very important week for Southwick? It's certainly not because his job is on the line. This is an important week because it is Game Two in a 12-game season where Game One didn't go so well. It is Southwick's opportunity to show he has improved and grown from the season opener and to do some positive, good things against a worse-than-Michigan-State defense.

This is not Southwick's last stand.

I get the sense that Bronco fans feel that it should be. This sense was hammered home while reviewing Chadd Cripe and Brian Murphy's Boise State football live chat from this week, which was - how do I put this - testy. Here are some selections from the anti-Southwick crowd: 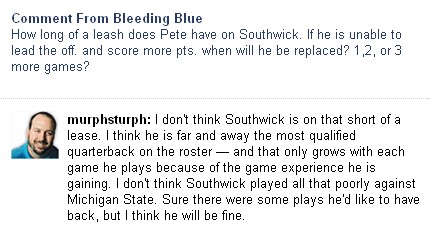 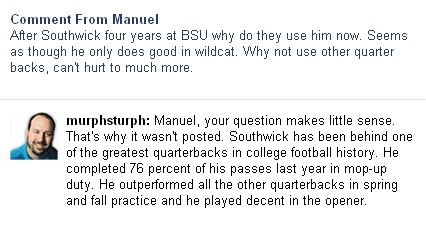 What can you really say about comments like these?

Joe Southwick has played one game as Boise State's starting quarterback. Can you really judge a player after one game (against a defense that was quasi-NFL)? You can, technically. You shouldn't. Southwick will be Boise State's quarterback for the forseeable future unless something much worse than August 31 happens.

There are a couple factors at play here: 1) how badly did Southwick play, and 2) what's the alternative. I get that some people might not be happy with an offense that did not score a touchdown and a quarterback who did not make big plays. That's understandable, to a certain extent, considering the lap of luxury we all had been sitting in with Kellen Moore. (I'm of the mind that he played neither badly nor well, kind of an in-between shrug of a game.)

But if you don't think Southwick is the guy, can you honestly say that any of the other three QBs on the roster are a better choice? Nick Patti went 1-for-10 in the fall scrimmage. Grant Hedrick threw three interceptions. There may come a point in the season where another quarterback is worth looking at, but that point will have to be so far in the future because at present Southwick is clearly, obviously the best Boise State has.

This concludes my soapbox for the week. 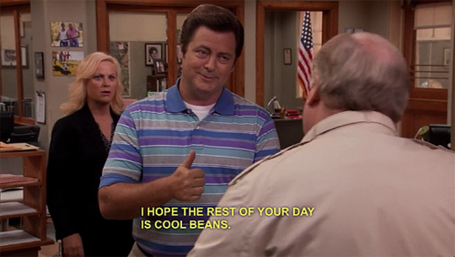 Thought No. 2: Suddenly, Boise State has a very busy backfield

It may not matter if the Broncos continue to rush below the Mendoza line, but Boise State has quite the logjam at running back. There is D.J. Harper who is first and foremost. But then who? Is true freshman Jack Fields really the No. 2 option? What about actual depth chart backup and seasoned vet Drew Wright? And don't forget about Jay Ajayi, who looked sensational in the fall scrimmage.

What is going on at the running back position? And can we please rush the ball better so I can get some clue? Thanks. That's all I want. And a win over BYU.

Thought No. 3: Sometimes I don't like being a Bronco fan

It's more a guilt by association thing than anything else. When I hear Bronco fans say things about Southwick or the offense without having facts or knowing facts or - as far as I can tell - thinking, my skin crawls and I get an overwhelming sense to disavow them immediately. I'm not proud of it, but then again, I'm not too happy when Joe Bronco fan makes us all look bad.

This concludes soapbox No. 2 for the week.

Thought No. 4: But what about our beautiful stadium of the future?

I found this quote haunting in a Chadd Cripe story yesterday:

Former Athletic Director Gene Bleymaier once touted a long-term vision for the stadium, but that's not necessarily the current vision.

The long-term vision, as I remember it, was to close off one end of the stadium. This is Bronco Stadium's destiny. I hope the current vision doesn't differ too much.

As of yesterday, you could still get a nice ticket to tomorrow's Miami (OH) game if you wanted. This probably doesn't help the "current vision" for Bronco Stadium expansion, since expanding by a couple thousand to 37K seems to be too much expansion already. I have some theories.

First theory is that Miami is a MAC team, and MAC teams are not sexy to Idahoans. Second theory is that Boise State lost last week and the bandwagon is getting light. Third theory is that people don't like Joe Southwick (this will be a theory all season long, I'm afraid).

On a personal note, I am not going to the game, so I am part of the problem. Watching football on TV is my preferred way of watching football, especially when you factor in the driving and parking and walking and waiting and Bronco Stadium video board. I think I might be slightly agoraphobic, or maybe I just like watching replays and taking naps during halftime.

What pregame thoughts are you thinking? Share yours in the comments.