Humming right along with our countdown. Can't stop us now.

We've got 23 days until kickoff...so today we'll be highlighting #23 on the Boise State roster—Eric Agbaroji 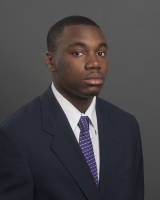 Agbaroji hails from high school football mecca, Texas, so if he excelled there, we're told he can excel anywhere. I'm apt to take "their" word for it. Agbaroji earned three varsity letters in football at Midlothian and was named first-team all-conference as a senior after recording 30 tackles, 12 PBUs, 3 blocked field goals and an interception. The previous year, Agbaroji made honorable mention all-conference after tallying 40 tackles, 13 PBUs and an interception. On top of his all-conference accolades, Agbaroji also was named to The Old Coach All-Area first team and All-State second team during his time at Midlothian. If not for a bum knee for parts of his junior and senior years, Boise State might have had to fight off the likes of Texas or other Lonestar State bigwigs for his services, but in the end represented Agbaroji's only solid offer. He was rated a 3-star recruit by Scout.com and Rivals.com (Yahoo! Sports).

This nickname depends on his last name being pronounced the way I've been pronouncing it...which it probably isn't.

After a hopefully fruitful redshirt year, Agbaroji should be set for take off in the Bronco defense. Just one pesky bit of business remains for the talented Texan: find out exactly where he's needed. Even with a year under his belt, Agbaroji is still being saddled with the "DB" tag rather than the specificity that comes with a "CB" or "S" after his name. This either means that the Bronco staff is keeping their options open with Eric, or that he has yet to really distinguish himself at any secondary slot. For the record, I think it's the latter. At MWC media days, a much-too-early depth chart was released by the Broncos, and even though we're told to take the chart with a healthy grain of salt, Agbaroji looks like he's landed (for now) at free safety, and nipping at Lee Hightower's heels.

Hightower, as you well remember, was pressed into duty last year after the injury bug bit and distinguished himself in the secondary, playing corner and wherever else the Broncos needed him. Hightower's coverage skills, sure tackling, and propensity for big hits made the coaching staff realize that safety was where he'd really shine—and the departure of George Iloka had left a convenient void in the secondary to boot. Now Agbaroji will likely press Hightower at a position that's fairly new for both (at least in the Division 1 arena). Honestly, I think that Hightower is going to be a star at FS, so you have to wonder whether Agbaroji will stick there or look for new digs where there's a little more wiggle room for playing time. At the very least, Agbaroji should be a solid backup, and even though I'm prepared to hand the reins over to Hightower...the coaching staff might not and he could surprise many and start. The fact that he's already penciled in at #2 after coming off a redshirt year is probably good news and you can bet that he'll have an opportunity to make an immediate mark on any and all special teams units. Rumor has it that the Longhorns would have been all over this kid if he hadn't suffered a knee injury in high school, so I think he's certainly got the pedigree to really excel on The Blue™. We'll just have to wait and see when and how much.