Thought No. 1: Do not panic. BCS hopes/heartbreaks are a long way away.

People might have you believe that a Boise State loss tonight would mean that the Broncos will be tough out of luck when it comes to qualifying for a BCS bowl. These people are getting a little ahead of themselves.

All Boise State has to do to make a BCS bowl is finish in the Top 16, provided no Big East team is above them (chortle). That won't be too hard to do when December rolls around, the Big East champ is 6-6, and way more than 16 teams have two losses or more. Tonight's game is not do or die for the postseason. So don't die, figuratively, if Boise State loses.

For my money, the epitome of game managers will always be Trent Dilfer, Super Bowl winning quarterback of the Baltimore Ravens. With that in mind, I have a hard time not throwing up in my mouth a little when I think about Boise State being guided by a game manager. I ralph at the site of checkdowns on third and long.

But Joe Southwick might very well be a game manager tonight, and that is not necessarily a bad thing. If the Broncos need to win this game 14-10 or - gak! - 6-3 and if it takes completing 30 passes for 90 yards to do it, then so be it. You, me, and everyone we know would prefer passing fireworks and touchdown bombs, but more than that, we would prefer a win. I won't hold it against Southwick for getting the W however he feels is necessary.

Thought No. 3: No Joe Tessitore? By definition, then, this cannot be a Friday night football game.

I hope you brought your A game, Carter Blackburn. 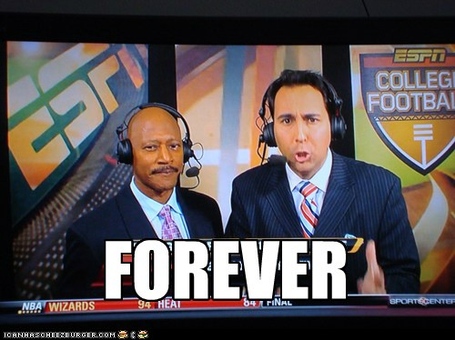 Thought No. 4: The new guys are old guys

Did you know that there are 24 seniors on this Boise State football team? That's like 600 percent more than the last Fiesta Bowl squad.

And yet, it seems like this year's team is so young.

They are, in spots. But what better defines this team rather than youth or inexperience is its unproven nature. These players have seen things and contributed to things throughout their Bronco careers, but this is the first chance they get to call something their own. This season is theirs, more so than a season has belonged to anyone else since the onset of the Moore era. I hope that the players recognize this. Their season doesn't have to be perfect or end in a national championship, but if they embrace the opportunity they have to make an impact on the Boise State program, then I think they should be just fine.

Thought No. 5: Look at this cool t-shirt. 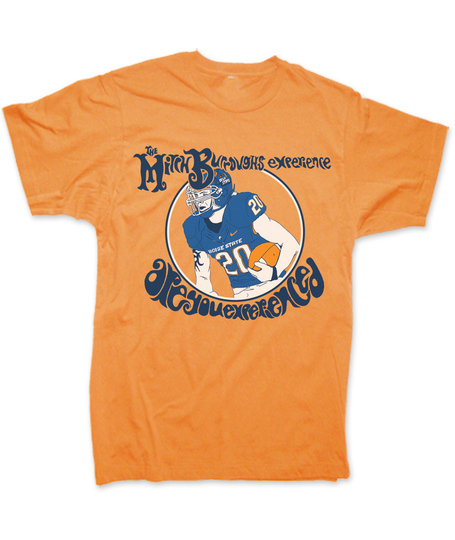 I had OBNUG reader and t-shirt magnate pourfavor work me up a sample tee for this week's game. Anyone know what the Mitch Burroughs Experience design references? (Spoiler.)

Maybe it is the bye next week or maybe it is because Michigan State represents the far-and-away toughest team on the Bronco schedule, but I can't seem to separate in my brain that tonight is Season A and the other 11 weeks is Season B.

Or maybe this is my coping mechanism. It kind of takes some pressure off, knowing that there is a brand new season awaiting us on Monday morning.

I do not like Joe Southwick (yet), but having the aforementioned Harper and Miller on offense makes me sleep much better at night. Harper-Miller-Southwick can provide enough offense to win this game.

Thought No. 9: Football, not a game for people who like warm fuzzies

The script for tonight's game would go like this in fairy world: Joe Southwick leads Boise State to a big win over Michigan State, spurring the Broncos toward an undefeated season and silencing critics who think this team is rebuilding.

Reality can and will go any number of ways other than that. Storybooks don't account for fumbled snaps or tipped passes or egregious pass interference penalties or, dare I say, missed kicks. These are the things that ruin games and break hearts. As a Bronco fan, I am sad to say that I know these pains all too well, and yet I come back for more. Tonight could go a billion different directions, and at least half a billion of those are very bad for me. It will take more than that to keep me away from the TV, though. Football has the unique ability to send me leaping around the living room and sobbing into my hands, sometimes on back-to-back plays. When the stakes are raised as high as they are tonight, that only serves to ratchet up the emotional toll, for better and for worse.

Football is a danger to myself and others. And I am so glad it's back.

A user's guide to panicking

Bronco Nation will be tempted to panic at virtually any moment during tonight's game. Here is a guide on when panic is an appropriate response and when it is just a plea for attention.

THE SKY IS TOTALLY FALLING if ...