Well, it's that time of year again—the time when a crisp morning chill starts to creep in and men's thoughts turn from Summer barbecues to Fall tailgates. Here at OBNUG, our thoughts are turning from countdowns and speculation to analysis and...well...speculation. It's an exciting time of year, to be sure...and our beloved Broncos will take the field at Spartan Stadium in a shade over 24 hours (which reminds me...I think I missed a flight). You've seen the depth chart and and maybe you've read some keys to the game...but can you truly be ready for gameday if you don't know 10 random and seemingly useless facts about our opponent? I say nay. That's why, once again, I'm gifting you lucky readers with Know your enemy. Remember to take good notes.

Learn more about Sparty and the teeming town of East Lansing after the jump...

10) The town of East Lansing was established in 1847 to the, get this, east of Michigan state capital Lansing. Early residents had originally hailed from Lansing proper, but felt that "moving on up" to the east would be beneficial (no word on whether East Lansing promised deluxe apartments to early settlers). Eight years later, in 1855, Michigan State (at the time called the Agricultural College of the State of Michigan) was established with a swanky 3 building spread, complete with 3 faculty members and 63 male students (the ladies had to attend Lansing Knitting and Child-rearing Academy just down the road). By 1870, the campus was made co-ed, allowing the fairer sex to take home economics courses (pie making, to the layman).

Not pictured: The womenfolk

9) Joseph Rickelson Williams was the first (and handsomest) president of what's today Michigan State University. Williams was a Harvard educated "gentleman farmer" who also dabbled in lawyerin' and politics (also in the most gentlemanly way imaginable). Williams instituted a healthy balance of liberal arts, sciences and vocational studies at the fledgling college and also made 3 hours of daily manual labor mandatory for all students (seriously). Williams resigned from his post after just two years on the job after butting heads with the State Board of Education who thought the Harvard man elitist, and local farmers who wanted their sons to quit book-learning and help out on the farm. Williams landed on his feet, however, and was elected to the Michigan state senate and became Lieutenant Governor soon after. He became a tireless fighter for the school's autonomy while in the senate, but in the end, couldn't fight influenza and died in 1861. A namesake men's dormitory burned to the ground in 1919, but a second Williams Hall was built in 1937 to house female students—although the second Williams Hall is name for his wife, Sarah. 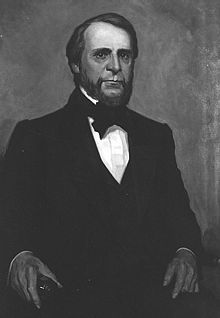 "An institution sprang from his mind just as a
beard sprung from the corners of his mouth."

8) Michigan State played their first season of football in 1885—a one game season against Albion, and a game that they lost 79-0. Whether demoralized or just disinterested, the school didn't play another down of football for the next 11 years and then got of the schneid in 1896 with a 1-2-1 season (their win came against vaunted Lansing High School). "Actual" coach Henry Keep came in the following year and rallied the team to a 4-2-1 record—the school also played Notre Dame for the first time that year...losing in South Bend 34-6. The team competed as the "Aggies" for a spell as agricultural institutions are wont to do, but in 1925 a contest was held to give the school's sports teams a new "fresh" nickname. The winning entry that the Thoreaus and Longfellows among the student body submitted was "The Michigan Staters", but local journalists cringed and pored through the losing entries until they arrived at "The Spartans"—an entry from Stephen Scofes, who wasn't a historian, but had just recently moved to Lansing from Sparta, Michigan (allegedly). Nevertheless, the name stuck...just remember that the Spartans are actually named after the township and not the fearsome ancient warriors. 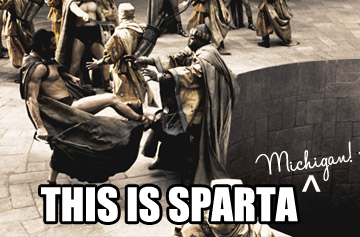 7) On October 8th, 1902, Michigan State lost to rival Michigan 119-0. The Aggies Staters whatever never got their comeuppance on the Wolverines, but did drop the hundo on Olivet about 18 years later when they shellacked the Comets 109-0. Not the biggest beating but perhaps the most uncouth in MSU's history was their 1909 blanking of the Michigan School for the Deaf. It's said that coach Chester Brewer had his squad call audibles all day.

6) The winningest coach in Michigan State's football history (percentage-wise) is "Big John" Macklin who coached the squad to a 29-5 record between 1911 and 1915. "Big John" was so named because he was...well...big—like, really big. Macklin was said to have grown to a height of 6'7" and weighed 275 lbs. during his playing days at Penn and these were the days when basketball centers and lollipop guild extras were one in the same. At any rate, the husky gentleman led the team to their first-ever wins over Ohio State, Michigan, Wisconsin and Penn State and still found time to coach the school's basketball, baseball and track and field teams. Macklin retired from coaching (and coaching, and coaching, and coaching) in 1916 to operate a coal mine—now you know the inspiration for the song "16 tons". 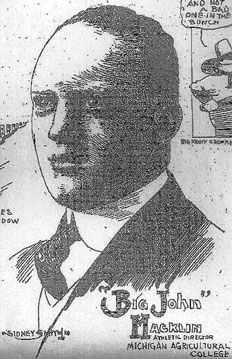 5) The yin to Macklin's yang (get your mind out of the gutter) was coach Charles Otis Bemies, who holds the distinction of losingest coach in Michigan State's football history (again, we're talking percentages here). Bemies coached the squad to a 3-10 record (.23 win percentage) in 2 forgettable years at the helm—in his last season, the team was 1-6 and only scored in 2 of the team's 7 games. Bemies wasn't a bad guy, he just wasn't cut out for football coaching, or coaching in general. He was an ordained Presbyterian minister who mainly got into coaching because they asked him to...and not because of his mad skills. Bemies graciously accepted the gig apparently to keep the ruffians from killing one another...quote:

"When Michigan State began playing football in 1896, the game was considered such a rowdy affair that the college fathers demanded that a minister handle the team to keep it within decent bounds. Thus the Rev. Charles O. Bemies became the school's first (second) coach."

Bemies was also the school's first basketball coach, but fared no better...posting a near-identical 3-10-1 record on the hardwood. After Bemies wisely retired from coaching, he became a country minister in Pennsylvania and then was named a YMCA ambassador to Russia, helped with post-war reconstruction in Europe, and gave field lectures to the A.E.F in France. Guess there's more than one way to build a legacy, huh?

4) One of the greatest football players in Michigan State history is not remembered for football at all. 1988 National League MVP and two-time World Series Champion Kirk Gibson was an All-American wide receiver for the Spartans before he ever set foot on a baseball diamond. Gibson played for the Spartans from 1975-1978 and led the team to the Big Ten title in 1978 (their first in 12 years)...over the course of his career, he racked up 2,347 receiving yards (3rd all-time) and grabbed 24 TDs (2nd all-time). It was only the suggestion of his coach, Darryl Rogers that led Gibson to the baseball field, and he batted .390 with 16 home runs and 52 RBIs in his only year on the team. Gibson was drafted in the first round of the MLB Draft by Detroit, but took out an insurance policy so he could play his final season on the gridiron. For some reason, I'd rather remember Gibson as a football player than a gimpy World Series hero...but that's only because football is superior to baseball in every way. But if you must relive the mustachioed fist-pumping, here you go, sports fans.

3) The Michigan State vs. Michigan is one of the oldest and harshest rivalries in the Big Ten Twelve whatever each year. Michigan State first played the Wolverines back in 1898, with the Wolverines winning by a score of 39-0. Every year thereafter, except for 1943-44—when that pesky WWII got in the way—the game has taken place. Currently, Michigan has a distinct edge in the series (67-32-5), but the Spartans are riding a 4-game winning streak. Since 1953, the two squads have played for the Paul Bunyan trophy—the Bunyaniest trophy in all of sport. The trophy is a four foot tall wooden statue (you'll have to guess of whom) with a five foot base and came about when a reporter suggested to Governor Mennen Williams (BYYY MENNEN—couldn't resist) that the two squads play for a yearly trophy. Folklore (and idiots) state that Paul Bunyan carved out the great lakes with his axe so Babe the Blue Ox could get a drink...so really, what other choice did they have? 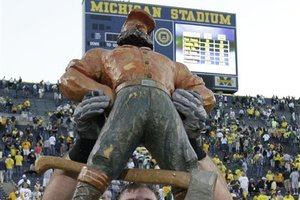 2) The city of East Lansing was a "dry city"—meaning that they prohibited the sale, possession, or consumption of alcohol—from 1907 to 1968 even though nationwide prohibition was introduced in 1920 and fizzled by 1933. This revelation is all the more perplexing given the fact that James Caan attended school there.

1) As Bronco fans, we're all fairly used to the term "that game about gave me a heart attack". We've experienced barn burners and nail biters...last second elation and last second despair. Well, a thrilling finish in 2010 actually did give Michigan State coach Mark Dantonio a heart attack...so maybe from now on I'll just say "that game really had me worried". Dantonio went all Boise State on Notre Dame on September 19, 2010, calling a fake 46-yard field goal in overtime that sealed the win for the Spartans. The thrilling end was a bit too much for Dantonio's ticker and he suffered a "mild" heart attack, but the tough-as-nails coach was back in time to coach the team to a win over rival Michigan on October 9th of the same year. We're sure glad that coach Dantonio made a full recovery and highlighted the health dangers of close games—always go for a blowout win, people...always.

If you think about it...it's a good thing Charlie Weis wasn't still around.