Well, we're right on the doorstep now, OBNUGers. This annual odyssey began back on May 23rd and has gone on, uninterrupted throughout the summer (thanks to a few clutch relievers that got me through some vacation days). We've now batted a thousand on the countdown for 3 straight years and this year's countdown consisted of roughly 60,000 words devoted to our Broncos...and they deserve every one of them. It seems this year, in my excitement, I started our countdown a day early, so there will be no countdown tomorrow. I doubt anyone will mind.

We've got 1 full day (tomorrow) until gameday...but since this jersey was claimed earned late this season, I'd highlighted it's bearer—Bryan Douglas—on day 46, and I couldn't bear to put a 'zero' anywhere close to our fearless leader, you're getting Coach Pete. Enjoy.

After a hall of fame career at UC Davis where he became the top-rated Division II quarterback in the nation, set as-yet-unbroken records for completion percentage (69.6) and became a Division II All-American, Petersen set out to begin his coaching career. His first big stop was at Pittsburgh, where he held the position of quarterbacks coach. At Pitt, his tutelage of QB Alex Van Pelt, led Van Pelt to eclipse the school's passing yardage record, established by Dan Marino. After his layover at Pitt, Petersen headed to Division II Portland State, where he again held the title of quarterbacks coach—the Vikings made the Division II playoffs both seasons that Petersen was there. Then, Petersen found himself at Oregon, where he coached the wide receivers. Twice during his 6 years at Oregon, the Duck offense broke the school record for single-season passing yards, and three times broke the single-season school record for most touchdowns. He joined the Broncos as offensive coordinator in 2001 and in his 5 seasons at OC, had two players earn All-America honors (running back Brock Forsey and OT Daryn Colledge). He also helped 12 Broncos earn first-team All-WAC honors, and 2 (Forsey and Dinwiddie) were named WAC Offensive Players of the Year. He became head coach of the Broncos in 2006...and well, the rest is history.

You just don't mess with perfection. 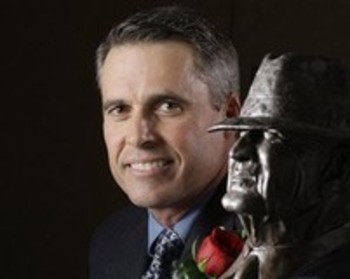 2007 Fiesta Bowl win over Oklahoma capped off 13-0 season. Recipient of 2007 Bear Bryant Award for nation's best coach. Back-to-back WAC coach of the year honors in 2008 and 2009. Capped another undefeated season in 2009, going 14-0 and winning second Fiesta Bowl against TCU. Recipient of yet another Bear Bryant Award in 2009, becoming the only two-time recipient. Won Bobby Dodd Coach of the Year award after 2010 campaign. Leads all active FBS coaches with .924 win percentage and has led the team to 6-straight 10-win seasons and 4 WAC championships.

Lucky. That's the word I'd use to describe Boise State getting, and holding on to Chris Petersen. It's kind of crazy when you step back for a moment...one of the best coaches in the game is right here, in Boise, Idaho...and from all appearances he's not going anywhere. That last part is what makes Pete such a rarity. Whereas other great coaches that come up through the coaching ranks generally use "smaller" schools as springboards to bigger, "better" gigs—Pete seems perfectly content to guide the Broncos from the safety and security of the Gem State. Coach Pete's staff, however, is not immune to the call of the traditional powers...we're now on our 3rd offensive coordinator of the Pete era, as well as our 2nd defensive coordinator and this year are breaking in a new D-line coach (Avalos) a new QB coach (Smith) and a new DB coach (Lake). Most Bronco fans feel that the team will continue to progress, however, as long as the nucleus is intact. That nucleus is our fearless leader, Chris Petersen. The BMOC is now making a competitive salary, getting facility upgrades right and left, and improving and expanding the Broncos recruiting base. No one person is bigger than the program or the school, but Pete is definitely doing and saying all the right things to ensure that the team's meteoric rise continues it's current trajectory—even after he's gone (something we're all hoping never happens in our lifetimes).

And Pete's got his work cut out for him this year. The Kellen Moore era is gone and with it, a bit of a security blanket. This is the season where Pete's hard work on the recruiting trail and attention to detail will loom largest. The Broncos once again have a young an inexperienced squad...kinda like in 2008. That class went on to win 50 games (50!) and while it's wildly optimistic to believe that the next four year cycle will be as successful (especially with the slight step up in competition that the Big East will provide)...I have no doubt that the Broncos will continue to be one of the best prepared, smartest teams on the field thanks to the tutelage of Chris Petersen. I mean, really...can you name one downside to Chris Petersen? I haven't really seen many chinks in the armor to this point and he's entering his 7th season at the helm. Pete could run for mayor of Boise right now and they'd run Dave Bieter out of town on a rail. So now, at the height of Pete's success and popularity, it's good to reflect on just how lucky we really are to have an innovative, no-nonsense, virtuous leader for our school and in our community. They don't come along every day.

Petersen's success and disciplined coaching has led to international acclaim. For example, some redecorating was recently done in China's Tiananmen square: 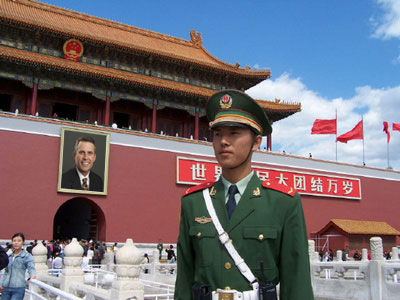