Michigan State is ranked #13 and generally regarded as the most difficult regular-season opponent the Broncos will face. Having stood our ground against the PAC-12, the ACC, and the SEC in seasons past, our Boys in Blue will now try to take down one of the premier teams from the nation's oldest athletic conference: Michigan State.

With teams like Michigan, Nebraska, Ohio State and Wisconsin populating the Big 10, it's no wonder fellow conference foe Michigan State attracts premier talent. While we all know the importance of heart when it comes to on-field performance, having extra athletic ability never hurt anyone. When the two are combined, game-changing performance is even more likely to occur.

Michigan State is chock full of game-changing players. Read about just a few after the jump...

A Junior defensive end, Preseason All-American William (Will) Ghoulston is widely considered Michigan State's best player. So how good is William Ghoulston? Scary good. At 6-foot 7 and 278 pounds, he’s listed on numerous preseason defensive player of the year watch lists, and is even listed on one preseason Heisman Watch list. He’s on so many other preseason award watch lists, it would take a few paragraphs to list them all. Needless to say, this guy's a beast who's expected to be selected in the first round of next year's draft.

And he's not shy either, piling up the Bulletin Board material as he looks to an undefeated season and season-long shut-outs.

"If you go undefeated, there's only one place you can go," he said of the BCS title game. "That's the goal, really. And not to have anybody score on us." "We're gonna dominate either way it goes..." 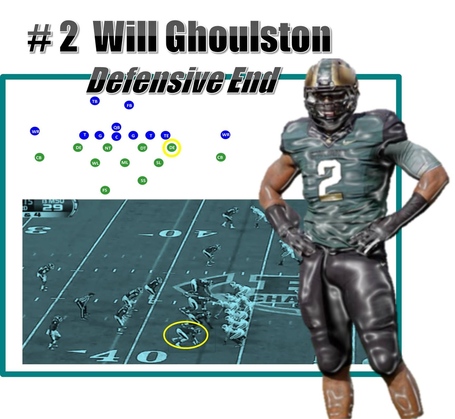 Will makes a habit of terrorizing offensive backfields. He is a master of disruption. He regularly draws double teams. He had 70 tackles last year, 16 of which were tackles for a loss.

Needless to say, he could easily determine the outcome of the game. Keep your eyes on Will when we have the ball. He’ll be more than a handful to contain. His athleticism has caused reporters to wonder if he will switch to Linebacker in goal-line situations. When asked if he had practiced as LB, he smiled and said, "No comment." William’s athletic prowess leads to the first key to the game.

Key to the Game #1: How well can MSU Defensive Ends pressure Boise’s QB when passing?

What does a Defensive End do?

The job of a Defensive End is to get into the backfield and make life miserable for running backs and quarterbacks. Compared to hefty Defensive Tackles, Defensive Ends are supposed to be faster and better at slipping past 320-lb Offensive Tackles whose only purpose in life is to stop them.

Their two defensive ends will line up a bit wide. They will try to avoid all blocks and get into our offensive backfield as quickly as possible.

If one of the DEs is quick enough to get past his offensive tackle, the quarterback will normally step forward towards his center and two guards.

However, if the nose tackle and defensive tackle have pushed the center and offensive guard backwards, the quarterback has nowhere to go. If the four defensive down linemen can consistently rush and disrupt the quarterback without any help from the rest of the defense, the offensive team is in real trouble.

Adapted from: Football 101: Defensive Line Alignments. The 4-3 Part I. by Mark Lawrence. http://football.calsci.com/DefensiveLine.html

Known for its defense, Michigan State's second-best player leads its vaunted secondary: Senior cornerback Johnny Adams. How good is Johnny? He's expected to become an All-American at season's end and be picked in the first round along with teammate Will Ghoulston. He's listed on a number of preseason award watch lists, including the Jim Thorpe Award, which honors the nation's best defensive back, and the Bronco Nagurski Award, which honors the nation's top defensive player. 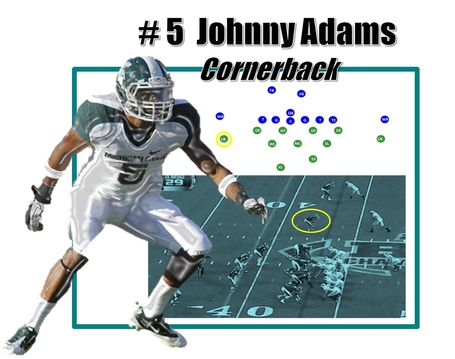 Since Michigan State's defense is expected to have a huge impact on the outcome of its games this year, the second key to the game is also a defensive one:

If Johnny Adams and his lauded cohort Darqueez Denard can shut Joe Southwick down, expect a long night for our Bronco offense.

What does a Cornerback do?

The cornerback is responsible for preventing an offensive receiver from catching and running with the ball. There are a few different ways the cornerback can try to play his position.

1. "Bump and run" coverage. In this type of coverage, the cornerback will block the wide receiver at the line, just as the play starts. (Such bumping is only legal within five yards of the line.) If the cornerback can delay the wide receiver for as little as one second, there's a good chance that the timing of that wide receiver's route will be screwed up and the quarterback won't be able to find him on the field.

3. "Help over the top." This means that the safety on his side of the field will be staying close to him, and if the ball is thrown his way the safety will quickly come over to help out. To cover an excellent wide receiver, it is typical for a cornerback and safety to use this technique.

Adapted from: Football 101: Defensive Line Alignments. The 4-3 Part I. by Mark Lawrence.http://football.calsci.com/DefensiveLine.html

Michigan State's defense may be getting all the headlines, but their offense is no slouch. Were it not for the departure of QB Kirk Cousins, Michigan State would easily be ranked in the Top 5. Yet Andrew Maxwell has been widely praised by both teammates, coaches and the local media for his leadership and performance. Many teammates do not believe there will be any drop in performance. 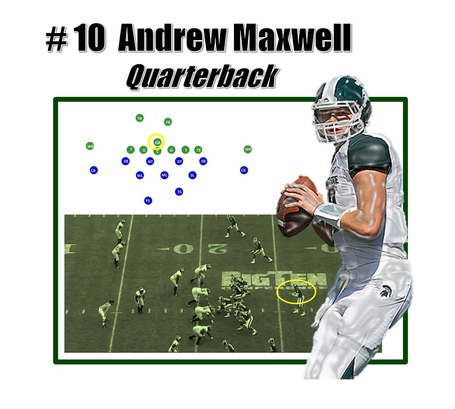 MSU quarterbacks coach Dave Warner: "I expect Andrew to go into this season where Kirk Cousins went in 2011. We anticipate him to… just continue taking the offense to the next level." - Aug 26, 2012

Tailback Le'Veon Bell: "He just kind of has that quarterback swagger about him. The way he carries himself and the way he talks to the team. The way he knows the playbook, the way he corrects things. He’s a vocal leader and has that natural-born leadership about him. I’m so confident in him." - Aug 26, 2012.

Andrew is not shy to tell others about his confidence either, "My high school coach called it moxie, you can call it swag, you can call it confidence, but I think whatever you call it, a quarterback’s gotta have it. It’s kind of that inner confidence that you can’t let... the swings of the game shape what you believe about your ability." - Aug 26, 2012

At tailback, Michigan State has Le'Veon Bell - a bruising and athletic back who is expected to run through the Big 10 for over 1,000 yards this season. Stopping him on the ground and Maxwell in the air will be critical if our Boys in Blue are to have a chance at victory. 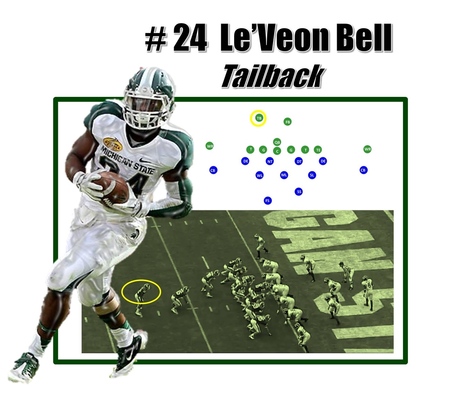 Here's hoping our Broncos can neutralize the impact of not only Will Ghoulston and Johnny Adams on defense, and Andrew Maxwell and Le'Veon Bell on offense, but all of Michigan State's players. Like any team, each and every player counts. And each and every player can turn the game around in just one play. May our Boys in Blue play hard, have fun, stay free of injury, and leave it all on the field.