We're so close now that wearing Bronco facepaint to the office is encouraged, although at my office it still hasn't caught on. Squares. 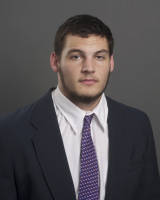 Blake "Black Eye" Renaud...coming to a nightmare near you. 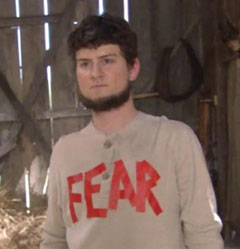 Mose. It must be the newly minted beard.

I'm just so freaking excited about Blake Renaud that I'm almost giddy. I've been seriously pining for the days when the Broncos had an every down, hard-hitting middle linebacker and Renaud has shown glimpses that he might be that backer. Yeah, we had Byron Hout roaming the middle for a couple of years, but he started as a defensive end, fought through injury and while he was a good run-stopper, I feel that Renaud has that certain...oh...Korey Hall-ness to him that I've really been missing. Hall was a sure tackler, a special teams demon and an absolute ball-hawk. Renaud, as luck would have it, is a sure tackler, a special teams demon and is quickly becoming a ball-hawk. This should be enough to fire up Bronco Nation.

Renaud is the real deal (and he's big!) and should be a staple at the MLB position for the next 3 seasons—thanks, in no small part to him burning his redshirt last year. 10 tackles in 10 games might, to some, seem to indicate a wasted redshirt year...but this season we'll see the method to the madness when Renaud is able to step onto the turf at East Lansing and be ready to go from the first whistle on. Tommy Smith will likely share MLB duties with Renaud this season, but if Renaud keeps the torrid pace he set in Spring Camp—a pace that saw him log a half-dozen interceptions—I think by year's end, Renaud will be the headliner...and on and on through 2013 and 2014. Expect Renaud to get at least 40 tackles this year and a minimum of 3 picks.

The Broncos are careful to never practice with Renaud and Dan Paul in the game at the same time as physicists have theorized that the two of them colliding at full speed would create a rift in the space-time continuum.