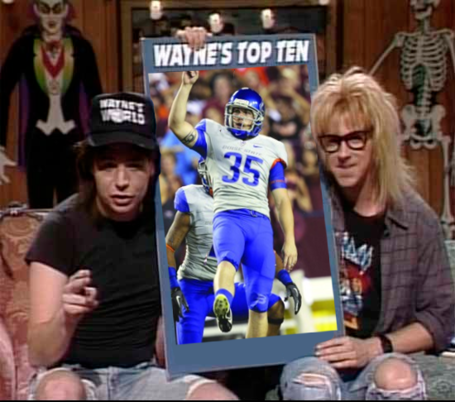 Too few posts on this website praise the prolific history of Boise State kickers, so here's hoping this one settles the tab for seasons' worth of reparations. Boise State has had some great ones. Here are five of the best.

5. Kyle Stringer (Class of 2006). Punting at Boise State can be a lonely job when the offense gets all selfish about scoring touchdowns. Stringer made the most of his punting opportunities, earning second-team All-WAC honors twice and a spot on the Ray Guy watch list. His best seasons never qualified for NCAA rankings because he punted too few times. Nevertheless, he holds two of the top three punting seasons in Bronco history with a 44-yard average in 2006 and a 43-yard average in 2004.

4. Mike Black (1991). Black held the career mark for most field goals at Boise State (51) for nearly 20 years before Kyle Brotzman came along and broke it. He and Brotzman also share a common bond of whiffing on a winning field goal in Nevada's Mackay Stadium. Black's kick would have sent the Broncos to the 1990 Division I-AA championship game, but instead, Nevada won in three overtimes. Black did bounce back the following year to earn third-team All-America honors and went on to kick in the arena league.

(Black also shares a fake punt story with Brotzman. Black's occurred in those same 1990 playoffs against No. 1 seed Middle Tennessee State. On fourth-and-two from his own 19-yard-line with the game tied in the fourth quarter, Black threw for a first down and extended a drive that ended with a score.) 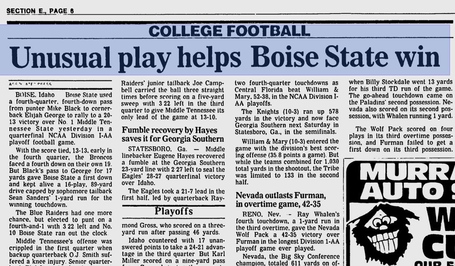 3. Nick Calaycay (2002). Calaycay finished his career as the second-leading scorer in Bronco history and the top scoring kicker ever (Brock Forsey topped him in points). It helped to play on some pretty prolific Bronco offenses, but it also helped that Calaycay had three seasons of 80 percent field goal accuracy, including a sophomore year where he went 15-of-16. He was all-Big West in 1999 and 2000, his freshman and sophomore years.

2. Tyler Jones (2004). Following in Calaycay's shoes, Jones set the Bronco kicker bar even higher by earning second-team All-America honors from the AP and Walter Camp his senior year. His 46 career field goals are third all-time at Boise State, and he holds the single season mark with 24 in 2004. He had a powerful leg with two 52-yarders during his career and a dependable leg with a mark of 74 straight made PATs. He signed a free agent contract with the Chicago Bears after his Boise State playing days.

1. Kyle Brotzman (2010). You may remember him for other things, but Brotzman deserves credit as the best kicker in Boise State history. The man is the all-time leading scorer in college football history, after all. His 439 points are more than any kicker has ever scored, and his mark of 118 straight extra point makes will probably stand forever. He has 16 more career field goals than any other kicker in Bronco history, and just in case your jury was still out on putting Brotzman No. 1, he is Boise State's record holder for career punting average, too. 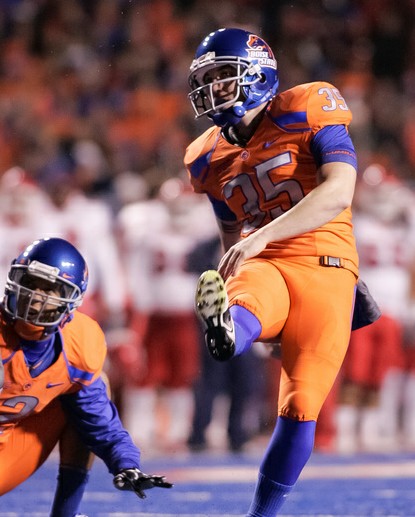