Share All sharing options for: Boise State in the NFL: Training camp update

Boise State football camp starts on Saturday, and former Boise Staters have been camping with NFL teams across America for a week now. Let's do a Google News check-in to see how they're doing.

DL Chase Baker - Minnesota Vikings - A pair of 53-man roster projections (one from the renowned SB Nation and another from the regurgitated Bleacher Report) have Baker missing the final cut. His name has yet to come up in practice reports, so no news is good news?

CB Chris Carr - Minnesota Vikings - Depending on what you read, Carr is either battling for a roster spot or the veteran glue that will hold the Viking secondary together. The Vikes put pads on today.

OT Ryan Clady - Denver Broncos - In the midst of negotiations for a new contract worth stupid amounts of money, Clady chose not to hold out and reported to training camp. Good for him. Also good for him: Clady was one of a dozen Broncos to visit victims of the Aurora shootings. 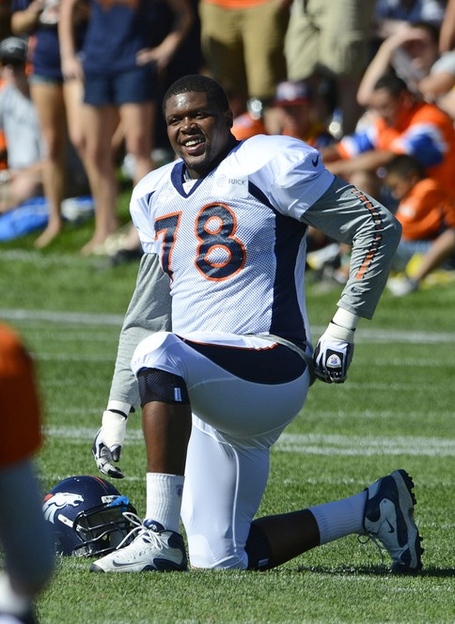 Sapp writes he decided to retire from football after a particular play in that game when he was up against Daryn Colledge.

"I had to look up his name," Sapp says about Colledge. "I came off the ball at the snap. Man, this young fellow jumped on my chest, grabbed me, shook me, and hitched up with me. Meanwhile, Favre did his little fake to the running back, dropped back, and cocked his arm. I was in full lock-up mode. I couldn't get this kid off me. I watched Favre let it go, and Greg Jennings caught it for an 80-yard touchdown. The kid was still holding me. Finally I said to him, 'Would you let me go now, young fella?' He did.

"That was the one play that let me know it was time," Sapp writes. "I knew the play. I had the snap count. I had a good get-off, and I had no move for an inexperienced kid."

This week: vs. Saints (Hall of Fame Game), this Sunday, NFL Network

DE Tyrone Crawford - Dallas Cowboys - After missing most of summer minicamp due to injury, Crawford has been turning heads so far in Cowboys training camp, including the heads of the linemen who are supposed to be blocking him but instead are turning around trying to see where he got off to.

Like what I saw early from defensive end Tyrone Crawford. Lined up at end and also some at nose. Did a nice job of fighting past Ronald Leary on his pass rush. Played some on the punt team as well.

TE Kyle Efaw - Oakland Raiders - Nothing to report. Carry on.

TE Tommy Gallarda - Atlanta Falcons - ESPN blogger Pat Yasinskas saw Gallarda "make one very nice catch in traffic over the middle," which is good for Gallarda since he is only expected to be a blocker and is fighting for the third TE spot on the team. The Atlanta Journal-Constitution predicts he will get it.

S George Iloka - Cincinnati Bengals - Iloka was thrust onto the first-team defense at nickel corner yesterday, courtesy of his being an all-around great football player and some Cincy depth issues. (He was promptly burned for a TD, but oh well.) People like what they see from Iloka.

DE Shea McClellin - Chicago Bears - The reality of being a smallish NFL defensive end is starting to set in for McClellin. He "wasn't very good" (his words, not mine) in a recent practice, and his size may give him a pass on playing run defense this year. Still, he showed flashes of his pass rush speed and moves, so it's not all bad. 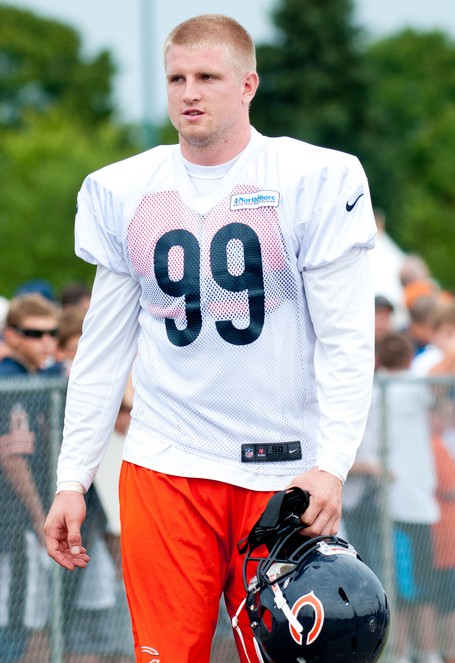 Martin has taken a majority of first-team reps in the first several days of camp, everyone loves his trademark running style, and then there are headlines like these:

QB Kellen Moore - Detroit Lions - Moore's battle with R.J. Archer for the third QB spot with the Lions will probably last throughout training camp, but at least for now it seems that Moore is 3A and Archer 3B. Moore has received more reps, but observers seem to like Archer's arm better. Just wait til Moore leads the Lions to 35 fourth quarter points in preseason game No. 1, then we'll see who likes whose arm better.

WR Legedu Naanee - Miami Dolphins - Naanee figures to start at wide receiver alongside Chad Johnson nee Ochocinco. Braylon Edwards worked out for the Dolphins over the weekend but was not signed.

Second year man, Austin Pettis, surprisingly, looked quicker and faster than I recall. He showed well in wide receiver drills. Although it was in receiver drills without a defender, Pettis made the catch of the day along the sideline.

This week: vs. Saints (Hall of Fame Game), this Sunday, NFL Network

CB Orlando Scandrick - Dallas Cowboys - Scandrick is expected to start in the nickel role for the Cowboys behind starters Morris Claiborne and Brandon Carr. Scandrick's competition at corner might get thinned out soon if the Cowboys follow through on trading Mike Jenkins.

CB Brandyn Thompson - Washington Redskins - Not much to report other than solid coverage on Pierre Garcon on a play last week. Better than not-solid coverage, I guess.

CB Kyle Wilson - New York Jets - Wilson got some reps with the first team when Darrelle Revis sat out with an injury. Also of note: Wilson is doing MMA training in Bart Scott's back yard.

WR Titus Young - Detroit Lions - According to Mlive.com, Young has been "unstoppable" and "in beast mode" throughout camp. He is making life very difficult on poor, Lion cornerbacks, and he has ascended to first-team status as a kick returner. He also likes how women communicate:

"There's nothing like being able to lean on your teammate, and not just for football, but for anything in life," Young said. "And I feel like women do a good job of communicating with each other ... and they gossip and do things like that. So I feel like when I get to this locker room, I'm doing a lot of gossiping with my teammates."