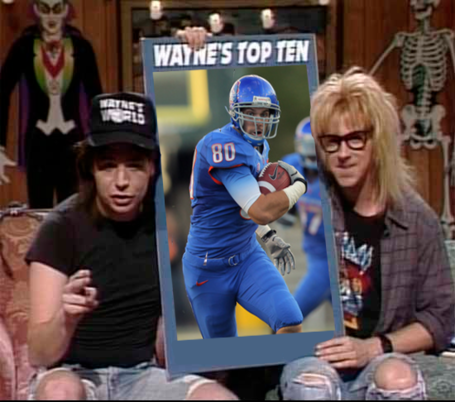 I find it a strange commentary on Boise State football that the Broncos have had infinitely more tight ends with lengthy pro careers than they have had quarterbacks ("infinitely" because, well, Boise State has had zero quarterbacks with lengthy pro careers). There have not been a ton of name brand Bronco tight ends, so the Top Ten list is only five. But really, aren't we all just wondering where Jeb Putzier and Derek Schouman finished?

5. Kyle Efaw (Class of 2011). Efaw saw time in every single Bronco game from his freshman season on. He finished his career with 13 total touchdowns, and interestingly enough, only one came during his first two years in blue and orange. He had seven his senior season, and the Mountain West honored him for doing so with an honorable mention selection.

Efaw's one shining moment came in the 2010 Fiesta Bowl when he was named offensive MVP and was the pass catcher in Boise State's infamous Riddler fake punt.

4. Dave Stachelski (1999). Stachelski paved the way for Boise State tight ends in the pros, getting drafted in the fifth round by the New England Patriots and appearing in nine games for the New Orleans Saints. His senior season at Boise State was his best, with 453 yards and six touchdowns to show for it. He was named all-Big West that year.

3. Duane Dlouhy (1981). All you need to know about Duane Dlouhy is that he caught the game-winning touchdown pass in the back of the end zone to win the 1980 I-AA national championship and he has not paid for a drink in Boise since. He has carte blanche on this list if he wants it.

Dlouhy continued to exist as a football player after that play, too. The following year, he was named all-conference and honorable mention All-America.

2. Jeb Putzier (2001). Putzier blurred the line between wide receiver and tight end at Boise State. Technically, he was a receiver for his first three seasons with the Broncos before moving to tight end his senior year. That's the position he would go on to excel at in the NFL, where he enjoyed a three year stretch with the Broncos and Texans where he appeared in all but two games.

He had the finest career, stats-wise, out of any Bronco tight end ... if you can call him that. His 128 catches and 2,050 yards are Top 15 marks for all pass catchers. His senior season (and Boise State's first in the WAC), Putzier caught 44 passes for 824 yards and 12 touchdowns. He was, obviously, first-team all-conference.

1. Derek Schouman (2006). As far as true tight ends go, it is hard to fine a Boise Stater better than Schouman. He did not put up the same prolific receiving numbers as Putzier, but he did just fine for himself. An all-WAC player in 2006, he finished his career with 1,009 yards and 11 touchdowns, and he showed up biggest when it mattered most - leading the team in receiving in the Fiesta Bowl and throwing the overtime TD pass to Vinny Perretta.