37 is a prime number and atomic number of rubidium. Neither of those facts are more interesting than this: we're one month and one week from football season. 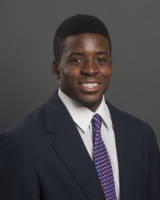 Arizona has become a hot recruiting bed of late, thanks to the efforts of coach Scott Huff (who's an Arizonan himself). That's where the Broncos found Ebenezer "Ebo" Makinde, a seven-time letterman from Paradise Valley High Schoo. Makinde was named first-team All-Desert Sky Conference as a senior as well as first-team all-region and first-team all-state. Makinde played in the Arizona North vs. South All-Star game. Makinde was also a two-time 400m regional champion in high school. Makinde received a scout grade of 74 by ESPN's recruiting service and was offered by Arizona, SDSU, Utah, UNLV, UTEP, and Wyoming.

Come on...the guy's name is Ebenezer—other nicknames just won't cut it. Besides, I hear he has a money bin on the outskirts of Duckburg.

Actor Deon Richmond (you know, "Kenny" from The Cosby Show)

It's fair to say that Makinde's 2011 campaign didn't quite go according to plan. He was expected to miss most of the season with a "chest injury", but rebounded in time for game 2 against Toledo. Then, he was forced into action—including his first career starts—when Jerrell Gavins went down with an injury, and played a significant role in 7 games for the Broncos before going down (again) with an extremely conspicuous hamstring injury against TCU, at which point his year was over. Talk about your rollercoaster rides, huh? And he didn't even get a commemorative polaroid of the ride.

Well, 2012 has arrived and with it new hope for Makinde—who I'm sure is ready to erase the bad memories of 2011 by turning in a stellar junior campaign. Makinde has only gotten faster too...keeping his title as "team's fastest" by running a 4.28 in Spring drills (his title is now shared with true soph Dallas Burroughs). Speed, experience, and a drive to right past wrongs could make 2012 a special year for the Arizonan...of course, he's still expected to come in right behind Jamar Taylor and Jerrell Gavins on the depth chart, but with Quaylon Ewing's departure and Lee Hightower's expected move to safety should have him the clear-cut favorite to see the field in dime packages and be first off the bench in relief of either of the two starters. Makinde can also showcase his considerable skills on special teams if the mood strikes the coaching staff (I think he'd make one heckuva gunner). The bottom line here is that I expect Makinde to play in nearly all the Broncos games this year...and on his own merits (not due to injuries ahead of him) and contribute in a big way. His tackle numbers should creep up at least into the 20s and carry his PBU and INT numbers with it. Just be careful with that chest and hamstring, kid.