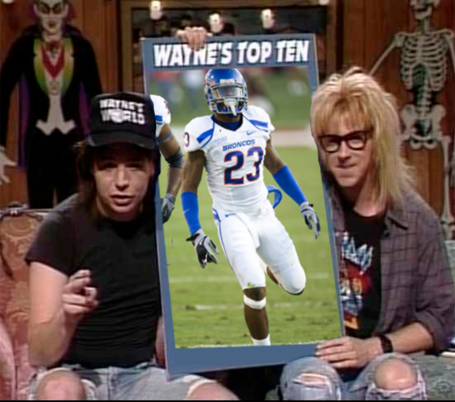 The Bronco secondary has become a breeding ground for NFL talent in the last decade. Cornerbacks grab all the headlines, but could safeties actually be Boise State's most pro-packed positional group? Here is a list of the 10 best safeties to ever roam the blue turf (or green turf for the old-timers).

10. Wes Nurse (Class of 2003). Nurse was part of Boise State's embarrassment of safety riches in the early 00s. Playing with Quintin Mikell and Chris Carr, Nurse provided a steady, hard-hitting presence in the Bronco secondary and finished his career in the Top 20 for all-time tackles at Boise State. His senior season, he was named to the all-WAC first team.

9. Gerald Alexander (2006). Were it not for spending his first four Bronco seasons as a cornerback, Alexander would likely be higher on this list. The Broncos moved him to safety his senior season, and all he did was start 12 games and help BSU beat Oklahoma in the Fiesta Bowl. That spring, Alexander became the highest Boise State defensive back to be drafted, going in the second round to the Detroit Lions.

His Bronco playing days will forever be remembered for laying the hammer on poor, unsuspecting Utah football player.

8. Shaunard Harts (2000). Before returning interceptions for touchdowns in bowl games against Louisville was cool (ref. Andy Avalos, Liberty Bowl), Harts was doing it, scoring on an 80-yard pick-six in the 1999 Human Bowl. His ball skills were helpful in the secondary and a boon to the return game (Harts was a converted high school running back). The Kansas City Chiefs liked him enough to draft him and keep him around for four years.

7. Rolly Woolsey (1974). Woolsey's six INTs in 1974 stand as a Top Ten mark in Bronco history, and they earned him an honorable mention All-America honor that year. Woolsey helped anchor the defense during the Tony Knap era, and he went on to a cup of coffee in the NFL with the Cowboys, Seahawks, and Browns.

6. Chris Carr (2004). You know Chris Carr as a journeyman NFL cornerback, but he made his mark at Boise State, roving the secondary as a safety and returning kicks like a ball of fire. He never was honored with all-WAC anything, but he is too busy having the last laugh with his millions in NFL money to notice.

5. Jeron Johnson (2010). Johnson was an imposing presence in the Boise State secondary on what many consider to be the best stretch of Bronco defenses ever. He was first-team all-conference once and second-team twice, and his 328 career tackles is 10th best all-time at Boise State. He now puts the fear of God into people for the Seattle Seahawks. Russell Hill, you know what I'm talking about.

4. George Iloka (2011). Johnson's safety mate for three years, Iloka starred for the Broncos from almost the minute he stepped on campus as an early arriver. His true freshman season, he ascended to the starting lineup, and four years later, he wound up as a fifth round draft pick of the Cincinnati Bengals. In between, he was a Sporting News all-freshman second-teamer, first-team All-WAC, and first-team All-Mountain West.

3. Marty Tadman (2007). One of Boise State's most beloved players (or is that just me?), Tadman was always in the right place at the right time in the Bronco secondary, perhaps no more so than in the Fiesta Bowl where he grabbed two interceptions, returned one for a score, and was named the Defensive MVP in the biggest game in Boise State's D1A history. His senior season, he was named first-team all-WAC to go with second-team honors the previous two years. Tadman is also well known for his lively personality, particularly when speaking about Hal Mumme's bandages.

2. Rick Woods (1981). Woods was a three-time D1-AA All-American as a safety and an all-Big Sky safety and kick returner. He was part of Boise State's national championship team, and he finished tied for the career postseason INT mark with three picks. The Pittsburgh Steelers drafted Woods in the second round of the 1982 draft, and he started 22 games over five seasons.

1. Quintin Mikell (2002). Considered by many to be Boise State's best NFL player, MIkell had a pretty star-studded Bronco career, too. He is second all-time at Boise State in tackles with 401 and in the Top 15 for tackles for loss with 30 (a stunning total for a safety). He was a three-time first-team all-conference pick, and he won the WAC Defensive Player of the Year award in 2002 for general awesomeness and oh yeah forcing eight fumbles.

His NFL career included eight years with the Philadelphia Eagles where he was named second-team All Pro twice and made a Pro Bowl. He is now holding things together for the St. Louis Rams. 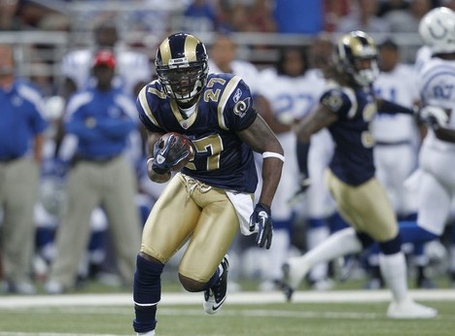