For all you people that hate Mondays, here's a countdown to cheer you up.

We've got 45 days until kickoff...so today we'll be highlighting #45 on the Bronco roster—Travis Saxton 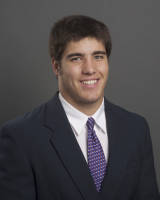 Saxton earned just two varsity football letters at Eagle High, but he definitely made them count—racking up a mind-blowing 270 tackles between his junior and senior seasons with 4 INTs and 6 forced fumbles. 172(!) of those 270 tackles came in his senior season alone, and for that, Saxton was named first team all-state and first team all-conference. Saxton was named honorable mention all-conference as a junior. Despite the lofty numbers, Saxton failed to garner any scholarship offers, which is a head scratcher if I ever heard one. Saxton walked on to the team and redshirted in 2010.

The Saxons were a Germanic tribe in the middle ages. Saxton is a linebacker from Star. The parallels are spooky.

Asked my wife for help on this one and she told me "he looks like that guy that was on The Bachelorette...the baseball player". I can only assume she was talking about football player Jesse Palmer. 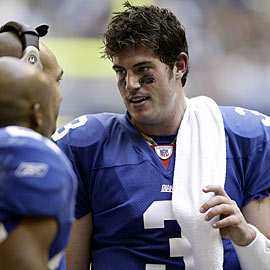 Made four game appearances in 2011, making two tackles. Named special teams scout team player of the week leading up to Oregon State game. All-state and all-conference as a senior and honorable mention as junior.

Last season, when discussing the Boise State LB depth, Saxton got rather lost in the shuffle. He was a walk-on, for one, and nobody really knew where he would line up (MLB or OLB) or fit into the fairly well-established depth chart. This season, we still don't know where he fits into the LB depth chart, but with the loss of starting MLB Byron Hout and OLB co-starter Aaron Tevis, he'll definitely have to be given special consideration, and a precipitous move up the depth chart may be in the cards.

In all honesty, I didn't really notice Saxton last season. Sight unseen, I can tell you that his four game appearances were probably in "garbage time" (to the layperson: when the game is firmly in hand for the victors), therefore I didn't get to do a detailed analysis of his performance. Furthermore, I still don't know whether he projects more as an OLB or a MLB—although my gut says he'd be a more natural OLB. If my hunch is correct, he'll be embroiled in a race to share playing time with another former walk-on, J.C. Percy at OLB...and here are his top competitors: True Frosh Tyler Gray (tall, rangy, Tevis-like), True Frosh Andrew Pint (Shorter, stockier—J.C. Percy-like) and maybe True Freshmen Ben Weaver (may project at MLB) or Chris Santini (may land at nickel or safety). Interesting. So, if my eyes don't deceive me, it's a certainty that J.C. Percy will be backed up or share duties with a true freshman this year or a walk-on—today's hero, Saxton, or Dustin Kamper. Based on the fact that ideally redshirting is the default position for true freshman and on the fact that Saxton has actually played, whereas Kamper has not...I'm prepared to name him the front-runner for OLB slot #2 going into Fall Camp. This will likely change in the days and weeks leading up to the August 31 kickoff...but for now, Travis is the guy. How do you like them apples?

I likely won't highlight another OLB prospect for the remainder of the countdown, so who do you all think has the inside track? Will a true freshman (or 2) step into the 2nd slot or will one of the aforementioned walk-ons grab the reins? Did I forget someone? Let's discuss this in the comments section.

Walking on to the Bronco football team was actually Saxton's back-up plan. The original plan was to walk on to the university's Muggle Quidditch team.*

*While the today's fact is completely made up, Muggle Quidditch is sadly, all too real.