Boise State playbook: Getting to know the zone read

Share All sharing options for: Boise State playbook: Getting to know the zone read

Dual threat quarterbacks are a hot commodity across college football, and Boise State - after four years with a single threat QB (albeit a very threatening threat) - will have a starter this fall who can pass and run. But not at the same time. That would be weird, and a penalty.

This designer breed of quarterback will require some alterations to the Boise State playbook, alterations that should lead to the addition of one of college football's hottest plays: the zone read. The Broncos have dabbled with the zone read before, resigning its use to Grant Hedrick packages and Joe Southwick garbage time. But this season, the play becomes a playbook staple. Expect to see it early and often, and expect to explain it to your friends several times before they get it. Here's what you can tell them.

The basics of the zone read

Zone read plays begin in the shotgun formation, as most trendy plays do. The quarterback has a running back at his side, the side that will become the backside of the play as the running back will move across the QB's body at the snap.

Speaking of the snap, when it happens, the offensive line blocks down in the direction of the play, leaving the backside defensive end unblocked. So if the play is going to the right, each offensive lineman will move to the right and wash everything that direction. Except the defensive end. The end is the person the quarterback reads in order to decide what to do with the football. 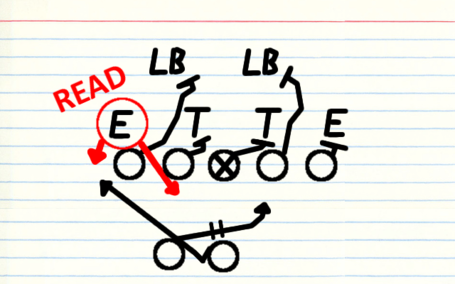 The play works, in theory, because of the threat of the running quarterback. When the Broncos called a running play with Kellen Moore, you essentially had 11 defenders playing against 10. (The Broncos performed creative theater like play action and movement to try to keep defenses honest.) When they call the zone read this season, it is 11 on 11.

Variations on the zone read

The zone read is a building block for a disturbing amount of variety. You know the Oregon offense? Much is predicated on the zone read concept and then taken to the extreme with options and passes and option passes and who knows what else. The zone read is merely a starting point.

What the zone read means to Boise State

Wrap your brain around what the Bronco coaches can do with a zone read foundation and all the playcall variety that it creates, then multiply that by 100 because your football brain is about 1/100th the size of a Bronco coach's.

Prepare mentally for Joe Southwick or Nick Patti to get up to 10 carries per game and for you to second-guess their decision-making at least once or twice.

The zone read will open up an entirely new element to the Bronco offense. We've seen glimpses of how effective it can be when Grant Hedrick ran it as a change of pace, but I get the sense that we have only scratched the surface. There is so much more to it, and when the Broncos throw the kitchen sink at Michigan State in 45 days, I'm excited to see what the sink looks like. Maybe it will have a zone read center sneak. One can dream.

What do you think of the zone read? Does it make sense? Are you excited to see how Boise State uses it? Share your thoughts in the comments.