Into the 40s we go with an extra spring in our step. Fall Camp is now close at hand.

We've got 49 days until kickoff...so today, I'll be highlighting the player that wears #49 on the Bronco roster—Hilton Richardson 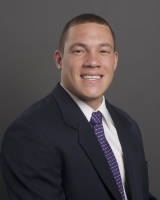 In the most roundabout way possible. Richardson might be the oldest redshirt freshman you've ever seen, as he drafted by the Kansas City Royals way back in 2007 B.K. (B.K.= Before Kellen). Richardson played in 325 games in over 5 seasons for various Royals farm teams before packing it in to walk on to the Bronco football team. It's like Malcolm Holland in reverse! Prior to being drafted, Richardson was, as you'd expect, a fine baseball player for Lake Washington High School—he was a Rawlins Pre-season All-American his senior year and was honorable mention All-Kingco League as a junior on the diamond. 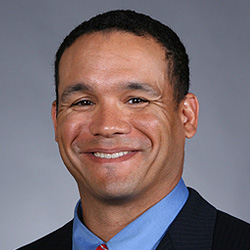 Drafted in the 7th round of the 2007 MLB draft by the Kansas City Royals.

Imagine for a moment, you're a Bronco coach (dibs on Coach Pete)—now, what do you do when a 6'2" 220 lb. athlete with incredible speed and athleticism shows up at your doorstep (Bronco Stadium has a doorstep, I assume) and wants to join the team? Open a few bottles of champagne, maybe? Now imagine that said athlete later goes on to tell you that he's never played football before...not one down. We're talking a guy that doesn't know a halfback from Nickelback. Still enthused? Maybe...although your gears are turning now with the burning question as just where to put this guy. Should you just throw him out there and see what sticks? If you said "yes" to that question—congratulations, you have what it takes to be a Bronco coach (except for, you know, the qualifications).

The Bronco coaching staff was indeed faced with this exact same scenario when a minor league baseball player named Hilton Richardson showed up on campus wanting to play for the Broncos. The coaching staff was thrilled to have an athletic specimen arrive at Bronco Stadium, but they still haven't quite figured out where to put him. First, they put Richardson at receiver, arguably, the least cerebral position on offense...then they moved him to nickel, one of the most cerebral positions on defense...then, this Spring it looked like Richardson had slid into a safety spot, and as of this posting, he's been saddled with the more generic "DB" tag. So where will Richardson finally wind up? Your guess is as good as mine (which is also as good as the coaching staffs). Richardson's best bet may to become a special teams demon. He's big, fast, and presumably can run in a straight line—a gunner, perhaps? Then when he really gets the hang of this football thing, maybe safety would be a good place to STAY. We've discussed the apparent lack of true safety depth the last few days and Richardson's size would make him an imposing force in the secondary. Honestly, if we can have a Dutch kid with little football experience become a starter at safety, I'm sure Richardson can be coached up as well. My gut says that he'll wind up taking the immediate place of Taylor Loffler, who looks like he may be hobbled with an injury this year. Whether that puts him 2nd, 3rd, or whatever on the depth chart for 2012 remains to be seen.

Richardson's family bought him a copy of "Football for Dummies" for Christmas. The book was co-written by Howie Long and is available for $10 on Amazon. I hope that wasn't his only gift. 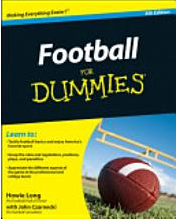