Happy weekend everyone! If you're in Idaho, it's free fishing day...so read this post and then go wet a line.

We've got 82 days until kickoff, so today we'll be highlighting #82 on the Bronco roster—Samuel Ukwuachu

Ukwuachu was one of the Broncos' earliest commits for the class of 2011, signing about 10 days after QB Jimmy Laughrea. The Broncos were the 8th school to offer the big Texas DE/WR, but obviously made a big impression on Ukwuachu as he verballed about 2 weeks after the offer even with more schollies showing up daily. All told, the Broncos beat out 11 other schools for his services, including Arizona, Baylor, Colorado, Illinois, Kansas, Louisville, Northwestern, and Virginia.

Again...this one is an actual nickname. Elliot Hoyte may just fight him for it, though. 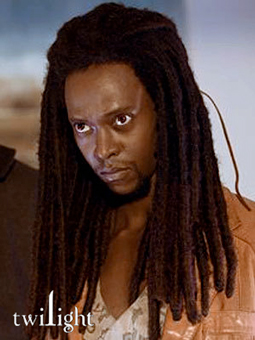 This dude from Twilight (my wife made me watch it, I swear)

An integral part of a Pearland team that won the Texas 5A Division I State Championship last year. Made second-team all-state as a junior and senior as well as being voted first-team all-conference both years. Was team's defensive MVP for 2010. Finished his senior season with 70 tackles and 10 sacks on defense and caught 16 passes for 328 yards and five touchdowns on offense.

Like other skinny but athletic defensive ends before him, Ukwuachu has definitely built a nice little groundswell of hype after redshirting last season. The question of what the Bronco coaches plan on doing with a 215 lb. defensive end remains. The likely answer: whatever they want. Football fans can get awfully hung up on heights and weights, and it's true that Ukwuachu isn't currently at an "ideal" weight for his position, defensive end. However, given how thin our DE depth is this year after the departures of Tyrone Crawford, Jarrell Root and Shea McClellin, and given how disruptive Ukwuachu was this Spring (4 tackles, a sack and a forced fumble in Spring Game alone)—we're going to see him this year. I know that we had similar thoughts about Kharyee Marshall when he first came on the scene before fizzling, but you have to understand that Marshall had much more experienced depth in front of him...this year it's all hands on deck. If it would help to envision Ukwuachu as a bit more of a OLB or rush end this season, by all means do so—his job will be to get after the QB and drop into short coverage ala Shea McClellin, and I think he'll do this just fine...his size restrictions only holding him back from being an every down type end. Ukwuachu has a bright future ahead of him at Boise State and I think we'll see flashes of it this year—his frame will grow as his experience does.

The most common response when Ukwuachu informs the media how his last name is pronounced is "Gesundheit!"