The 10 greatest cornerbacks in the history of Boise State cornerbacks

Share All sharing options for: The 10 greatest cornerbacks in the history of Boise State cornerbacks 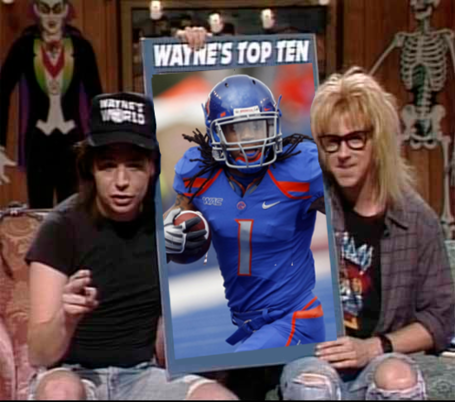 Boise State has been very good at churning out defensive back talent over the years, so much so that the all-time CB team could go eight-deep with NFL alumni. How do you separate a decorated group like the Bronco CBs? Carefully and with great personal bias. Here's what we came up with.

10. Julius Brown (Class of 2003) - Brown was partners in cornerback crime with Gabe Frankllin and a stalwart in the Bronco secondary on two WAC champions, putting in his best work as a senior when he led the conference in passes defensed and earned honorable mention all-conference honors. After his Boise State playing days, Brown joined BSU as the Director of Player Personnel, a position he held until Troy University hired him away as their new cornerbacks coach in March.

9. Rashid Gayle (1995) - Gayle's junior season in 1994 was special. He picked off seven passes, which is good for fourth-best all-time at Boise, and was named first-team All-America by the Sports Network and second-team AA by the Associated Press. He followed up those honors by going all-Big Sky the next year and intercepting several fewer passes because opposing teams caught wise. Gayle was drafted by the Jacksonville Jaguars in the team's second-ever draft.

8. Orlando Scandrick (2007) - Scandrick started 12 games in his true freshman season and as good enough to earn freshman all-America honors from Scout.com and the Sporting News. The highlight of his freshman season came against Hawaii when he returned a blocked field goal for a touchdown and a blocked extra point for a two-point conversion. Highlights do not exist on the Internet, so I would recommend knocking on all your neighbors' doors until you find someone with the VHS.

Scandrick started every game his next two seasons and then left early for the NFL where he was a fifth-round draft pick of the Dallas Cowboys. He has fallen out of favor with Boise State fans who bristle when Scandrick fails to mention Boise State in his Sunday Night Football introduction, an omission rumored to be based on Scandrick's disappointment in the Bronco coaching staff for not wanting him to go pro early.

7. Steve Forrey (1970) - The all-time interceptions leader at Boise State is only seventh on this list? There must be some good cornerbacks ahead.

6. Brandyn Thompson (2010) - While Bronco fans may remember Thompson for being an up-and-down corner (what corner isn't?), he did come up big in some of Boise State's biggest games. To wit, the 2010 Fiesta Bowl where he was named Defensive MVP and returned an Andy Dalton pass for a score. He also had a memorable three-INT night against Hawaii 2008. Like Scandrick before him, Thompson played as a true freshman, and he finished his four-year career tied for eighth on the Boise State career INT list. He now plays for the Washington Redskins and lives in Mike Shanahan's doghouse.

5. Gary Rosolowich (1976) - A two-time AP honorable mention All-American, Rosolowich ("Rolo" to his friends) helped Boise State to a string of three-straight Big Sky championships from 1973 through 1975 and was a two-time all-Big Sky honoree during the stretch. He went on to play in the CFL and now spies coaches in Hawaii.

4. Dempsy Dees (2000) - Dees was one of the best in Boise State's Big West era, earning all-conference honors in 1999 and 2000. He helped transition the Broncos into I-AA and was a key player on Boise State's back-to-back Human Bowl champions.

3. Gabe Franklin (2004) - Franklin is third on the career INT list with 18 picks, including eight in his 2002 sophomore season. He finished his career with 18 career interceptions, an All-WAC honor, and an East-West Shrine Game invite, and followed all that up with a free agent contract with the Chargers.

2. Frank Robinson (1991) - Steve Forrey's career interception mark has stood for over 40 years, and the closest to breaking it was Robinson who came up two short and finished with 22. It's probably not something that keeps Robinson up at night since he has an All-America award and two all-Big Sky plaques to keep him warm and cozy. He was great in coverage and great in the clutch. His three INTs against Northern Iowa in the 1990 D1-AA playoffs still stands as a Boise State record.

1. Kyle Wilson (2009) - After his sensational career at Boise State that included , Wilson became the second Boise State player to be drafted in the first round. The draft spot was well-deserved as Wilson may have been one of Boise State's most NFL-ready prospects in school history. Choosing to stay at Boise State for his senior year despite lofty draft projections, Wilson added to his Bronco legacy that included two all-WAC honors and an All-America second-team spot his junior year. As adept at punt returns as he was at coverage, Wilson knew what to do when he had the ball in his hands, as evidenced by his two INT returns for scores in 2009 and the fact that no one even bothered throwing at him in 2010.