Share All sharing options for: Boise State is the 33rd-best team in NCAA Football 13 and tied for the most prestigious

For those of you who enjoy your video games like you enjoy your life - with as much Boise State football as is humanly or digitally possible - then the recent leak of unofficial NCAA football ratings must have made your day. For those of you who don't play video games, think of it as a pixelated preview magazine that just so happens to let you play 11-on-11 Buster Bronco mascots versus Stanford Tree mascots.

Boise State received an 89 overall rating in the game - 89 for offense and 82 for defense (-7 to the EA team for computing an average).

The Broncos also received six prestige stars out of six, which roughly translates to the idea that recruits want them, teams want to be them.

The overall rating is not good enough to hang with the top echelon teams in the game. Oregon, Texas, LSU, Wisconsin, and USC got perfect 99s. But being rated 89 will more than cover Boise State in the Mountain West. Fresno State is the closets to the Broncos with an 87 rating, and we all know that Fresno's rating is preseason-specific and will steadily fall once the conference schedule begins. Nevada, San Diego State, and Colorado State (!) (?) are next with 83s.

The NCAA Football 13 demo is out now for you PS3 and Xbox owners. If you download it and share it with others, you can unlock five Pro Combat uniforms, including Boise State's all-whites and these other four grosser ones. 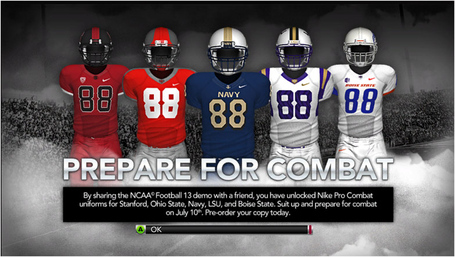