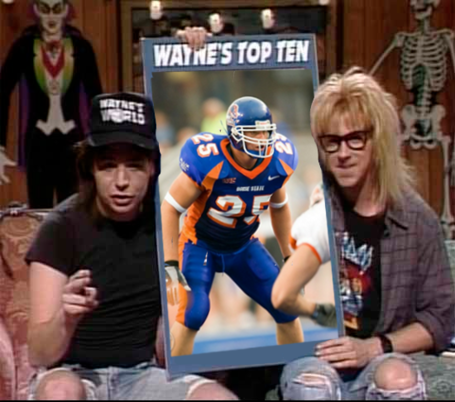 Boise State's standard 4-2-5 defense has ushered in a new era for linebacker play, full of job sharing and stat splicing. Will we ever see linebackers as decorated and valuable as the stars of Boise State's past? Probably (Blake Renaud, here's looking at you).

That said, don't be surprised when you see the Top Ten all-time Boise State linebackers and don't see many from recent history. The group is still crazy good with all-conference MVPs, NFL legends, and a Pro Football Hall of Famer. I even threw in a certain cult legend nickelbacker (where else would he go?). Here's the list. Enjoy.

10. Scott Russell (Class of 1990) - Russell's sophomore season in 1988 was perhaps one of the best sophomore seasons in the history of Bronco football. Russell finished with the all-time single-season record for tackles with 164 and was named honorable mention All-America. In one game (against a tackle-generous Northern Arizona) Russell had 28 tackles by his lonesome, still a Boise State record.

For his career, Russell holds the all-time tackles mark with 415. Recently, only Jeron Johnson has been in sniffing distance of Russell's mark, and Johnson was almost 100 tackles shy.

8. Winston Venable (2010) - Rolling the nickel position in with linebackers doesn't seem fair. The nickel has helped redefine the Bronco defense during an era when the defense has never been better. Quite possibly the best Bronco defense of our lifetime (2010) featured Venable at nickel where he earned all-WAC honors and made big play after big play and big hit after big hit for the team. A JC transfer, Venable only had two years at Boise State. It wasn't enough (unless you ask Ryan Colburn).

7. Larry Polowski (1978) - Polowski starred for Boise State during the Big Sky era and had a sensational senior season that was marked with all-Big Sky honors and an honorable mention All-America nod (one of eight Broncos on the '78 team to receive AA awards). He was a seventh round draft pick of the Seattle Seahawks back when being a seventh-rounder in the NFL Draft meant you were a mid-round pick.

6. Andy Avalos (2004) - Avalos was a first-team All-WAC pick in 2003 and 2004 and was one of Boise State's defensive stars during the heady Dinwiddie years at Boise State. Though he holds a spot in the Top Five on Boise State's career tackles list, Avalos might best be remembered for his 92-yard interception return for a touchdown against Louisville in the 2004 Liberty Bowl. Avalos now coaches D-line for the Broncos and would surely appreciate it if you bring up that interception return any and every time you see him.

5. Carl Keever (1984) - Not many Broncos can say they were three-time All-Americans and not many college linebackers can claim three seasons of 130+ tackles. Keever can. His run of tackling terror from 1982 through 1984 earned him first-team All-America twice with an honorable mention wedged in between. His 397 career tackles are good for third all-time at Boise State. And he now has the distinction of being the No. 5 all-time linebacker at Boise State, as determined by a bunch of fans who know a thing or two about Boise State football. Everything's coming up Keever.

4. Bryan Johnson (1999) - Johnson was named all-Big West as a senior in 1999, and he capped his outstanding career with an outstanding performance against Louisville in Boise State's first bowl win as a D-1 team. Johnson played six years in the NFL as a fullback with the Redskins and the Bears where, according to his Wikipedia page, "he quickly became a No. 1 fantasy football pick." Fantasy football must have been different back then.

3. John Rade (1982) - How good was Rade at creating chaos in the backfield? In his two years at Boise State, the JC transfer recorded 31 tackles for loss, good for second all-time for the Broncos. His eight TFLs against Utah State in 1982 still stand as a BSU record. Rade blurred the line between linebacker and defensive end to the point that he was named All-America at both positions during his playing days. The Big Sky recognized his superpowers as a linebacker and named Rade twice to the all-Big Sky team and handed him the Defensive Player of the Year award in 1982, out of fear probably.

Rade remains one of Boise State's most accomplished NFL alums. He started 112 games with the Atlanta Falcons during a nine-year season.

2. Dave Wilcox (1962) - Wilcox holds the distinction of being the only Boise State alumnus in the Pro Football Hall of Fame, albeit with an asterisk. The 49er great began his career on Lyle Smith's Boise Junior College teams before transferring to finish his college career at Oregon. No matter. We're counting him.

His two years at BJC were enough to make him one of Boise State's all-time greats even after 50 years have passed. Lyle Smith called him the most outstanding player he coached, and the All-American committees agreed, handing Wilcox JC AA honors during both of his years in Boise. A defensive end in college, Wilcox was drafted to play linebacker by the AFL's Houston Oilers and the NFL's San Francisco 49ers. He chose the Niners, and the rest is history.

1. Korey Hall (2006) - One of the most beloved players in the past decade of Boise State football, Hall was a four-year starter who was a regular on all-conference teams for his defensive acumen and his special teams demonry. The linebacker shoes he left are gigantic and have yet to be filled. Boise State has not had a first-team all-conference since.

For his career, Hall is fourth all-time in tackles and makes appearances in the record books for tackles-for-loss, interceptions, and interception return yardage. He was first-team All-WAC three times and the WAC's defensive player of the year his senior season. He hasn't done too shabby in the pros either, winning a Super Bowl with the Green Bay Packers.