ESPN thinks the 2012 Boise State football team can win it all, maybe, possibly, if the stars align

Share All sharing options for: ESPN thinks the 2012 Boise State football team can win it all, maybe, possibly, if the stars align

ESPN Insider is spending its summer previewing 20 college football teams that can win it all ("all" meaning "mythical national championships and computer affection"), and Boise State made the list at No. 11 (via). Not bad for losing an entire all-conference team worth of talent.

The high number of lost starters is actually one of Insider's fears about the Broncos, but you'd have to pony up for a subscription to get the nitty-gritty. I ponied up on your behalf and have prepared some crib notes on ESPN's pros, cons, and percentages for our 2012 Boise State football team.

Pro: Boise State is more experienced than you think it is.

According to the ESPN stat heads, the Broncos return 48 of last season's 68 lettermen, including four offensive linemen with starting experience. This was meant as a compliment; however, ESPN is a little short in its math. Boise State returns nine offensive linemen with starting experience. They could essentially do hockey-style line shifts between snap if they wish.

Pro: Boise State can run the football better than most.

We Bronco fans know this to be true. The Boise State offense has a pass-first exoskeleton but its heart and soul and guts have traditionally come from running the football effectively. ESPN points out that the Broncos ran for 2,235 yards last season. I'd expect that number to be even higher this year with a healthy D.J. Harper and a scrambling Joe Southwick / Nick Patti.

Con: There are hard games on the schedule.

Specifically, those hard games are early - at Michigan State, home to BYU, and at Southern Miss. Also, per ESPN, lose any of those games and spend the rest of the season planning for another Vegas Bowl.

Even at their best, hasn't there always one game where they seem to go into a bit of a vapor lock? If they do that at any point over this year's first five games, they can kiss the BCS goodbye.

Con: Defensive depth isn't what is used to be.

You, me, and everyone we know is well aware of Boise State's overhaul on defense. The possibility exists that this year's D could be worse, which would just add to the descent from Mount Domination in 2010. Here's a smug chart to elaborate: 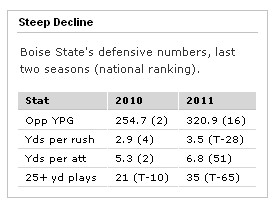 I'll buy the premise of shallow defensive depth (although I prefer the glass-half-full unproven depth moniker). However, ESPN explained itself by pointing to two returnees with all-star potential ... just not the two returnees you may have thought:

The good news is that two of the returnees have the potential to be very good, if not great: defensive end DeMarcus Lawrence and linebacker J.C. Percy. The bad news is that anyone else who makes a run at all-conference would be a bit of a surprise.

A) DeMarcus Lawrence is not a returnee; he's a JUCO transfer. And B), no Jamar Taylor or Jerrell Gavins or Lee Hightower? Disappointing.

Conclusion: Boise State will win no fewer than nine games and maybe even go undefeated.

With a major overhaul on both sides of the ball, expect Boise State to be involved in more shootouts than blowouts this fall, but they'll still have a decisive edge in nearly every game.

For its final results, ESPN tapped into the computer mainframe to put a 10 percent chance on the Broncos going undefeated this year, with a most likely result of a 10-2 finish. The odds of losing four times in 2012 are minuscule, which is good because Bronco Nation might burn Boise to the ground if that happens.

All in all, not a bad story about a team a lot of people are writing off as an elite group this year. Kudos to ESPN for basing its decisions on historical precedent and not the Mark May Kool-Aid.

What do you agree with in ESPN's preview? What do you disagree with? Share your thoughts in the comments.