We're at our second palindrome of the countdown, so rejoice math nerds!

We've got 88 days until kickoff ... so today we'll be taking a look at number 88 on the Bronco roster—Chandler Koch

Koch came to Boise State in the soon-to-be-famed 2008 recruiting class. A star at Flower Mound, Koch was the No. 3 tight end in the Dallas/Ft. Worth area, which is infinitely more impressive than being the No. 3 tight end in the Idaho Falls/Ririe area. ESPN.com had him as the 35th best TE prospect in the country. He most likely would have been higher on everyone's radar except that he never had more than 400 yards receiving or two touchdowns in high school. He is what you call a "well-rounded" tight end, which I guess is boring to some people. He had other offers from Houston, Colorado State, New Mexico, and San Diego State. He chose the good option.

My wife came up with this one...honest. 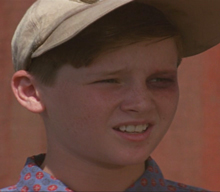 Scotty Smalls from The Sandlot

2-time first team all-conference selectee in high school. Played in nine games as a freshman at Boise State, 10 as a sophomore and 11 games as a junior (gut says '12' for this year). Named to WAC All-Academic team in 2009 and 2010.

As discussed yesterday...and tomorrow and the next day—Boise State's built up quite the stable of tight ends on the roster and given the way the classes are staggered, should have a similar "problem" for years to come. Where each player fits into the depth chart isn't exactly a closely-guarded secret—make plays and hit your blocks and you've got a better-than-average chance at remaining in the Bronco game plan. The tight end likely to spend the most time in the Bronco huddle is the one that can do both things well. Gabe Linehan is probably the Bronco that currently fit that mold the best, hence his presumptive spot at the top of the tight end depth chart. Of the current crop, Chandler Koch may be the most one-sided player—but that's not necessarily a bad thing. Blocking is Koch's deal...and he does it well. Well enough to sometimes split time at fullback...something that will probably be rendered unnecessary this season with a healthy Dan Paul and a Bacon-y Michael Atkinson. I foresee Koch making a ton of game appearances (possibly one every week), but continue to be an unsung hero for the Broncos. He's not going to be racking up impressive receiving stats (he's got just 60 receiving yards on 8 receptions overall), but he'll probably play in all 12 games this year and we'll probably see him in a lot in 2 TE sets and when the Broncos need some extra pass protection. Probably the only thing missing from his Bronco resumé is a touchdown—although I'm confident he's blocked for more than a handful—so here's to him checking that one last item off the list in this, his last year with the program.